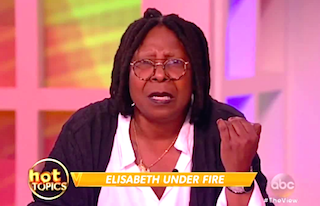 Fox & Friends host Elisabeth Hasselbeck has been taking some heat over the past couple of days for asking a former NYPD officer if Sandra Bland, who died in jail of an alleged suicide, could have used her lit cigarette as a weapon against the officer who arrested her. Wednesday morning, The View’s Whoopi Goldberg defended her “buddy” and former co-host against accusations of “racism.”

“Somehow, it’s no longer OK to pose a question that will give you an answer in order to best understand what’s going on,” Goldberg said, after playing the clip. “We’ve been friends for about seven, eight years and she has not asked me to pick any cotton.”

“People love to throw that phrase around, ‘You’re a racist, you’re this, you’re that,'” she added. “It is not racist to ask a question.”

Similarly, Raven-Symoné said, “There’s a lot of people of color that feel like white people shouldn’t ask certain questions because they don’t understand it and they don’t feel like you’re being sensitive to it, and I don’t think that’s fair.”

“I didn’t find it offensive at all,” Rosie Perez said, agreeing with her co-hosts. “I felt like she was asking a provocative question as a journalist.” She also wondered if this would be an issue at all if someone like Matt Lauer had asked the same question.

“If we stop asking questions, how will we ever know the truth? How will we know what happens?” Goldberg asked, getting more and more worked up. “Relax! You’ll recognize the real racists, you’ll know them when you see them and hear them. This woman sat here for 12 years, and had disagreements. That does not make her a freaking racist.”