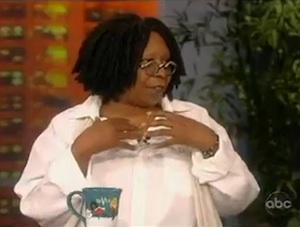 “I like Hitler’s moustache as a look,” Joy Behar provocatively quipped, referring to her nether regions, to stunned silence.

While body image obviously is an important subject matter for women, the shockingly frank talk about genitalia (and frequent use of the term pudenda) on network television perhaps went a little too far for many daytime viewers. ABC might want to consider airing a viewer discretion advised warning before such topics are discussed.