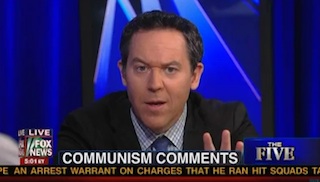 Recently on The View, during a conversation on North Korea’s transition of power, Whoopi Goldberg made comments stating that Communism makes sense “on paper” but doesn’t work once humans put it in practice. Clearly this means that she is a Communist. At least, that seemed to be the message of a segment on The Five where they accused Goldberg of not being condemn-y enough or something.

After the group attacked Goldberg for her super Communist “Communism doesn’t really work” comments, Bob Beckel accused his co-hosts of editing the View clip so as to lose its context. But that’s ridiculous. There was plenty of context there to see how silly attacking her was.

The whole segment was launched by a Greg Gutfeld monologue who, after dissing Goldberg, transitioned into talking about Sean Penn and Susan Sarandon. Really the whole thing felt a bit like they really wanted to do a “Hollywood libtards are CRAZYYYY” segment but none of their usual targets had said anything recently.

The whole thing was bizarre. I mean, when I was in middle school, the entire lesson on Communism my hard-line conservative history teacher gave us could be summed up as “it looks good on paper but doesn’t work.” How is that in any way controversial?

Also (and not to go overboard on the Goldberg defense), but didn’t we go over the fart thing already?