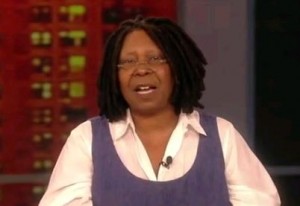 The View was on hiatus when the Trayvon Martin story began to slowly spiral out of control, so it was a given that some attention would be paid to the growing scandal when the show returned this morning. Initially, Joy Behar expressed confusion that the expert analysis of the 911 phone call in which someone can be heard calling for help didn’t positively identify the voice as Trayvon’s — rather, it concluded that the voice calling for help was not George Zimmerman’s. Who else’s voice could it be, Behar wondered? Barbara Walters chimed in to say that she was shocked that Zimmerman hadn’t been arrested, and Elisabeth Hasselbeck seemed generally upset by the teen’s death. Hasselbeck raised the point that Geraldo Rivera may have been responsible for the coverage’s ugly turn, but Walters shut down that train of thought, saying that it was only a small part of the issue.

That may be true, but Rivera’s commentary on the case seems to have been when the media conversation took a turn for the worse. Additionally, Rivera has a larger platform than any regular blog commenter, Twitterer or Facebook user — shouldn’t his responsibility to choose his words carefully be greater? Whoopi Goldberg chose to blame social networks in their entirety, however, insisting that the problem lies with people who don’t think before they Tweet, and the story should be refocused to concentrate on “a seventeen-year-old boy who was shot by a vigilante.” You can see a clip of the conversation here, via ABC: