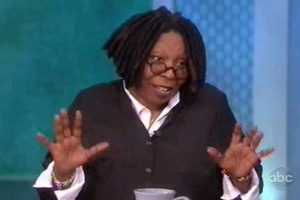 Whoopi Goldberg may have just won the title of the TSA’s most rigorous celebrity supporter in this late-autumn junk-touching scandal. After admitting she didn’t mind a good “squeeze” to Mike Huckabee last week, the View co-host took a hard line of attack on the proposed TSA “Opt-Out Day” protest scheduled for the Wednesday before Thanksgiving. That event was not only rude, Goldberg contends– it was terrorism.

Goldberg’s point, as she further explains it on the program, is that deliberately slowing down security at an airport and hindering the commute of American travelers is to sabotage the system, and falls under the definition of terrorism. She finds little resistance among her peers, of which Elisabeth Hasselbeck seems to most enthusiastically agree (yes, a moment where Whoopi Goldberg and Elisabeth Hasselbeck enthusiastically agree on something– savor it while it lasts). Neither them nor anyone on the panel bring up the possibility that Opt-Out Day– in which Americans would choose to opt out of the body scanner en masse such as to create long lines at airports in protest of the invasive body scanner procedure– may fall into the category of civil disobedience.

The ladies then quibble over why anyone is upset by the new TSA rules at all, with Joy Behar finding particularly ridiculous Rep. Ron Paul‘s call for boycotting flying in protest of the new regulations. Barbara Walters disagreed, identifying Rep. Paul’s protest as “in the great American spirit.” Behar did support some sort of “personality profiling” system to streamline airport security, however– something many opponents of the new TSA regulations have been advocating.

The TSA has found itself mostly isolated in the junk-touching vs. no-junk-touching debate, so it will be interesting to see how their position develops if support for their security measures snowballs further than the ladies of The View. For now, Goldberg has earned herself yet another soundbite moment to be praised or skewered over by the partisan media.

The View segment via ABC below: