Whoopi Presses Ann Romney On Sons’ Lack Of Military Service: Does Mormonism Not Allow It? 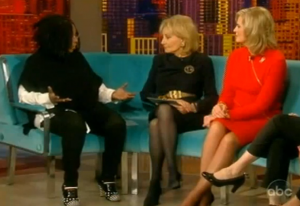 On Thursday, Ann Romney joined The View, alongside one of her sons, Josh Romney. Ann Romney and the ladies chatted both about her and her husband’s political views and campaigning, with Whoopi Goldberg in particular zoning in on the reasons behind Romneys’ sons’ lack of military service.

As Ann Romney made herself at home on the couch with the co-hosts, Barbara Walters was quick to point to Mitt Romney‘s remarks about The View in the infamous “47 percent” video. In the footage from the fundraiser, he noted the show was “high risk,” its co-hosts “sharp-tongued.”

Without skipping a beat, Ann Romney, eliciting laughter, replied, “No, he said sharp and young.”

Jokes aside, the segment turned to a much more serious topic, as Walters noted the show’s focus on women’s issues, mentioning Mitt Romney’s previously being pro-choice on the issue of abortion, but now opposing it (except in cases of rape, incest, life of the mother). Walters asked for Ann Romney’s own view.

“The good news is I’m not running for office, and I don’t have to say what I feel,” she replied. “But I’m pro-life. I’m happy to say that.”

Along the same vein of women’s issues, Joy Behar asked Ann Romney whether she feels contraception is an economic issue. “I would love it if you’d get my husband on the couch,” she replied. (Her husband was previously scheduled to make a joint appearance with her but canceled.)

Later in the segment, Goldberg turned to military service, seeking to clarify whether the Romneys’ Mormon faith “doesn’t allow you to go fight.”

“No, that’s not correct,” Ann Romney replied. “We have many, many members of our faith that are serving in the armed services.”

“Okay, well I say that because what I read about your husband, what I read — and maybe you can correct this — is that the reason that he didn’t serve in Vietnam was because it was against the religion,” Goldberg said.

“I sent them away boys, and they came back men,” she added.

“So when you’re facing these mothers whose children have not come back, how will you explain to them that your sons haven’t gone?” Goldberg asked further.