Whoopi Skeptical of Cosby Rape Accuser: ‘I Have a Lot of Questions for Her’ 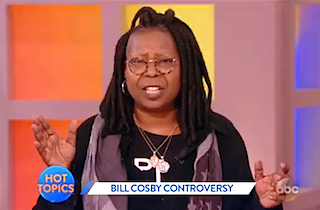 On Monday morning, The View opened with a frank discussion of the mounting rape allegations against Bill Cosby that came to a head this weekend when the comedian refused to address them during a radio interview with NPR. Whoopi Goldberg, who led the conversation, expressed more than a bit of skepticism over the claims against Cosby, urging his most vocal accuser, Barbara Bowman to come on the show and explain some things.

“Quite honesty, you know, look, I’m sorry, having been on both sides of this where people allege that you do something, it doesn’t matter now,” Goldberg said. “The cat is out of the bag, people have it in their heads. I have a lot of questions for the lady. Maybe she’ll come on.”

After playing a clip of Bowman claiming no one believed her at the time of the incidents because of Cosby’s stature, Whoopi argued that the police or the hospital might have and wondered aloud why she never had a rape kit done. When Rosie O’Donnell pointed out that Cosby has settled with women in some of the cases, Goldberg made pains to say that “settlements don’t necessarily mean you’re guilty.”

“It’s more than awkward, it’s a tragedy!” Nicolle Wallace responded. “Either 13 women were raped by someone too powerful to face the criminal justice system or an innocent man is being falsely accused.”

Meanwhile, O’Donnell tended to agree with Goldberg’s assessment. “When you are a famous person and friends with a famous person who gets accused, it is an awkward position to be in especially if you’re on a show talking about current events.”

Hinting at her own experience of being accused of crimes she says she did not commit, Goldberg warned, “One of the things that getting accused of when you’re famous does is it opens the door for everybody to come out and say, ‘me too, boss.'”

It was more than five years ago that Goldberg defended another celebrity accused of rape on The View, saying of Roman Polanski, “I know it wasn’t rape-rape. It was something else but I don’t believe it was rape-rape.”

Watch the full discussion below, via ABC: