‘Who’s the Whore Now?’ Bashir Gets In Explosive Argument With Tea Party Guest 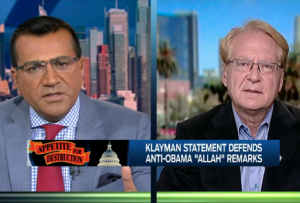 MSNBC’s Martin Bashir got into a heated back-and-forth with tea party activist Larry Klayman on Friday over Klayman’s attacks on President Obama as a foreign-born Muslim whose foreign policies benefit America’s enemies at the expense of the United States and Israel. Klayman insisted he was being metaphorical when speaking about Obama, which set Bashir off even further.

Bashir first brought up Klayman’s book about political “whores” and asked him between Ted Cruz and Mitch McConnell who the whore is. Klayman said it was McConnell, hands-down.

Things got way more heated when Bashir brought up a clip of Klayman saying Obama should leave town and “put the Qu’ran down,” asking him if he really believes Obama is a “foreign-born Muslims who has hoodwinked the entire nation.” Klayman argued his statements were “metaphoric,” “but they ring true” because Obama has done everything he can to harm the U.S. in the Middle East.

Bashir asked, “Was it the act of a rabble-rouser who tells lies in public just to incite the crowd? And I have to ask you, who’s the whore now?”

Klayman took a shot at MSNBC for, once again, using “cropped quotes,” and then Bashir asked this burning question.

“How would you defend yourself if accused of being a delusional racist whose hatred for this president is, in fact, a form of psychiatric pathology, an illness?”