Why Are Alex Wagner And Guests Using Poker Chips To Explain Political Prognostications? 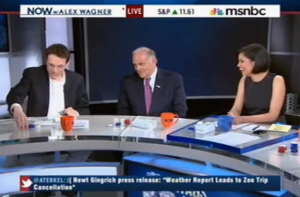 Wagner cheerfully introduced it as “everybody’s favorite part of the show” and proceeded to go around the table, asking for bets. Gov. Rendell moved around his chips and decided, “I’ll put half of my money on Romney to win Mississippi and half for Newt to win Alabama.” Kornacki one-upped him by “going for the trifecta, exact order of finish, one, two, three: Gingrich first, Romney second and Santorum third.”

The political poker game reached its peak and got really good when it came time for Murphy’s bet. Because she doesn’t want the race to “coalesce” and wants it to “go and go and go,” she not only went all in for Gingrich (“I feel like it’s Newt land”), she even wagered her iPhone. Her iPhone! She’s “not kidding around,” you guys.

And that made McLean feel “lame”! And pressured to be more dramatic with her wager!

Do the producers (or whoever came up with this) really think the viewers need to see Monopoly money being pushed around a table to understand the panel’s betting on primary results? The dumbed-down, totally literal approach is pretty insulting to Wagner’s viewers. It’s not that props in general are a problem, but that this is not at all a difficult concept to grasp, and giggling and playing with poker chips adds nothing other than making her guests seem silly/ridiculous. And this is a recurring segment!

Wagner herself went all in on Santorum, and referring to Hawaii, said, “His daughter is there, who knows? I heard she is good at hula.” (A statement that is comically juxtaposed with the following sentence about the White House comments about the war in Afghanistan.)

Have fun. Please. But these piles of “Chinese-made American currency” brought nothing to table other than some cringeworthy television.. . Sorry, Alex, it’s not my favorite part of the show.

Take a look for yourselves, via MSNBC: