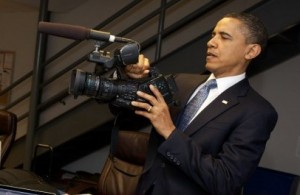 As a liberal, this shouldn’t bother me. Yesterday, cable networks devoted whole segments to a film that presents President Barack Obama in a glowing, almost saintly light, even though it has little to no news value. The film focuses on the past, rather than on current events, and doesn’t present any new information (that’s why we call it “news,” knuckleheads), so even for a liberal like me, it’s hard to understand how these cable networks are doing anything other than trying to ensure the President’s reelection.

In addition to its utter lack of news value, the film is one of the most broadly-appealing presentations of Obama that I’ve ever seen. It features President Obama resolutely standing up for what he believes in, which will especially appeal to independents, but it also shows him sticking it to the ivory-towered elites of liberal academia, which will be veritable catnip for conservatives. I’m referring, of course, to the much-hyped film of then-President of the Harvard Law Review Barack Obama introducing Professor Derrick Bell, the first tenured black professor at Harvard Law School, at a 1990 protest of Harvard’s hiring practices.

This piece of fluff has it all: a young, idealistic Barack Obama showing off the oratory that would become his trademark, standing up to the eggheads at Harvard Law School for their failure to hire a tenured black female professor (which they didn’t do until 1998), palling around with the guy who is essentially the Jackie Robinson of Harvard Law. As if that wasn’t enough, a later version of the film even shows President Obama hugging the guy. We get it! All Hail Saint Obama!

This tape was foreshadowed, by the late Andrew Breitbart at this year’s CPAC, as one spoke in a wheel of mind-blowing vetting of President Obama. Buzzfeed’s Ben Smith scooped Breitbart’s integrated Big sites by releasing the tape Wednesday morning, but without that incriminating hug. Editor-in-chief of Breitbart.com Joel Pollak and contributor Ben Shapiro later took to the Hannity show to expose the smoking guns that Smith left out. The Young Turks‘ Cenk Uygur breaks it down:

The whole idea here is to smear Professor Bell as a “racialist radical,” thus smearing Barack Obama by association, and to accuse the media of covering it up. Now, Professor Bell’s views were somewhat controversial, but not as controversial as his style of legal scholarship, which involved the use of parables and narrative storytelling. But he was a “radical” in the same sense that Kevin Bacon‘s character in Footloose was a radical; that is, only if you’re a psychotic, uptight preacher who’s afraid of that Devil’s music.

One of the “smoking guns” to this coverup that Shapiro and Pollak cite is the fact that Prof. Charles Ogletree told students at a lecture, after showing the film, that he had kept it hidden during the 2008 election (which is the part of this whole story that actually is an exclusive).

I hate to break it to these guys, but Professor Ogletree isn’t part of the media, and unless he put some kind of magical forcefield around the PBS website,  or Youtube (where it reached a million views within weeks of being uploaded on 10/15/2008), or every TV that received their 2008 broadcast of that footage, he didn’t have the ability to hide anything. The natural question, then, is why did he have the desire to do so, and the self-evident answer is that he wished to spare his (now-deceased) colleague the smearing is is receiving now.

There’s also the question of why the rest of the media didn’t pick up on the tape, which is also fairly self-evident. It wasn’t newsworthy then, it isn’t now. If you don’t want to take liberal Tommy Christopher’s word for it, answer me this: why didn’t the conservative media pick up on it? Where was Newsbusters? You want to talk about digging, the Obama-hating Naked Emperor News tracked down videos so obscure, they wouldn’t make it into a Dennis Miller rant, but she completely missed this million-view YouTube?

All kidding aside, this is not only not newsworthy, it does the exact opposite of what it’s supposed to do. I was working for AOL in 2008, and if I had seen this clip, I probably would have wanted to post it, but I would have struggled to eke out three paragraphs on it, and would have been beset with “IN THE TANK” accusations, because it shows President Obama in such a favorable light. The Bigs say there’s more to come, and if the next “bombshell” is anything like this, bring it on.

The headline of this post, by the way, is an obvious bait-and-switch reference to filmmaker Davis Guggenheim‘s pro-Barack Obama documentary The Road We’ve Traveled, which begs the question “Why are cable networks devoting free airtime to a pro-Obama propaganda film?”

In a nutshell, I have zero problem with news networks airing this, or any other campaign ad, for free as part of their news and commentary shows. In fact, I think it has a great democratizing effect in our politics. Whether you’re a candidate with a huge war chest, or one who’s barely getting by, all you need is a compelling spot and a Youtube account, and you’re in the ballgame. Plus, it allows for discussions (of varying quality) of the issues that appear in these ads. I especially like that creativity is rewarded in this process, which is rare in news and politics.

I do have to give the Bigs props for digging up Cosmic Slop, the 1994 HBO movie that tears the roof off The Twilight Zone by casting the great George Clinton in the Rod Serling role, in an anthology of stories which includes Professor Bell’s 1992 short story The Space Traders. Other than that, though, they ought to heed Clinton’s advice regarding The Funk, and give it up.