Why Are We Watching John Kasich Stuff His Face Live on Fox News, MSNBC and CNN?
Opinion
video

Why Are We Watching John Kasich Stuff His Face Live on Fox News, MSNBC and CNN? 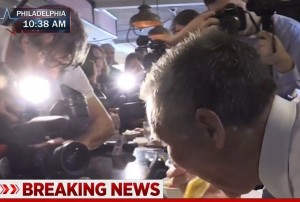 shovel food into his mawThe 2016 presidential campaign is apparently endlessly fascinating, as illustrated by the fact that all three cable news networks simultaneously threw to live coverage of Ohio Governor John Kasich feeding his face at a Philadelphia diner Monday morning. Why the blanket coverage of a guy who normally couldn’t get a column inch if he literally set himself on fire? MSNBC’s Steve Kornacki explains that Kasich is about to drop bombs about his deal with Ted Cruz to stop Donald Trump:

my team met with the Cruz people and they made a recommendation to me. I said I think it’s fair because, you know, in some places we haven’t spent a lot of resources…

Reporter: So who should your supporters vote for in Indiana?

I’ve never told them not to vote for me. They should vote for me. You ought to feel good about it. Mine is like the people’s campaign. We’ve been outspent basically 50-1. Everybody chill out.

Time was in order to get three networks to cut in live, you had to either shoot a president or be driving a white Bronco, but now all it takes is a Denver omelet and a delegate process story. Sure, we all love watching John Kasich sweatily, but trust me, guys, you’re not going to see a mass exodus of viewers if one of you cuts away.