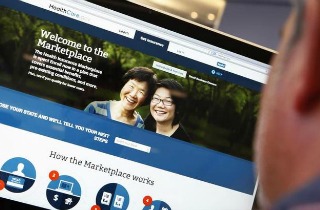 It appears the only way to get the news media to cover policy is to dangle it over a cliff.

According to a report from Health and Human Services Monday, the Affordable Care Act has enrolled a total of 16.4 million people, dropping the U.S.’s uninsured rate 35% — the largest drop since the implementation of Medicare and Medicaid forty years ago.

But in yet another instance of the selectivity of television news, the report merited nary a mention on any of the major cable news networks Monday. (By contrast, Hillary Clinton was mentioned 160 times.) Though Obamacare has been in the news due to its second challenge at the Supreme Court and its complications at tax season, the lack of political drama surrounding enrollment seems to have dampened interest in the program’s performance.

Enrollment data was last spring’s political sport, with the success of the program simplistically hinging on whether it met a 7 million enrollment goal. (It missed, barely.) Early heavy enrollments were seen as necessary to establish the structural integrity of the marketplaces and moderate premium prices, and opponents of the law celebrated initially-low figures as proof Obamacare would implode.

One year later, the law seems to be chugging along, albeit not at the rate originally projected. (The CBO initially projected 13 million would enroll in 2015; the Obama administration revised that down to 9.9 million last November; the actual number is about 11 million.) Per today’s HHS report, 14.1 million have gained health insurance thanks to the state and federal run health exchanges and the expansion of Medicaid under the law, while an additional 2.3 million young adults gained access due to a 2010 provision allowing people to stay on their parents’ health plans until 26. (The numbers released today do not include children.) Breakdown of the data shows the strongest gains being made among the poor, Hispanics, and African-Americans, meaning the law is making health care available to those who had the least access to it, as it was intended to do.

However, an adverse ruling by the Supreme Court in King v Burwell case would strip thirty-four states of subsidies, forcing millions off their new plans; an estimated 9 million could lose coverage as a result. This is a more sensational fate than a drop in the uninsured rate, surely, but only because the law granted so many access to health coverage in the first place.

Instead, cable news is taking for granted the law’s functionality to cover the drama over its potential disappearance, treating its coverage of an extra 16 million people as important only because it can then be imperiled. This is a terrible way to cover actual policy, and all but ensures we’ll only appreciate functional policy when it’s in danger of being snatched away.