Why Did This Atheist Wear a Pasta Strainer on His Head During Driver’s License Photo?
video

Why Did This Atheist Wear a Pasta Strainer on His Head During Driver’s License Photo? 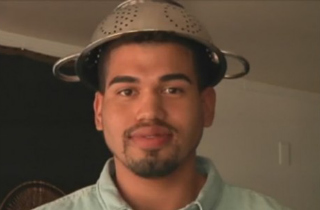 Under the banner of religious freedom, many Americans are allowed to wear religious headgear in their driver’s license photograph: Jewish males can wear yarmulkes; Muslim women, in many localities, may wear a hijab. So why shouldn’t atheists be allowed to wear a pasta strainer to “worship” the Flying Spaghetti Monster?

Texas Tech student Eddie Castillo tested those limits in his recent driver’s license photo by donning a pasta strainer. “You might think this is some sort of a gag or prank by a college student, but thousands, including myself, see it as a political and religious milestone for all atheists everywhere,” he told KCBD 11.

The pasta strainer is symbolic of the “pastafarian” movement, a group created in protest of the Kansas School Board’s 2005 decision to teach intelligent design. Although atheists obviously do not believe in the Flying Spaghetti Monster as a deity, the movement has become an illustrative (and perhaps parodic) tool in seeking to normalize and breed acceptance for all “religious” views.

In an interview with KLBK-TV, Castillo described his trip to the Texas Department of Public Safety, in which he successfully donned a strainer for his photograph. “Once she allowed me to I put the pasta strainer on my head, I took the biggest, cheesiest smile I probably ever took,” he said.

Atheists have long tried to gain permission to wear a strainer in official photographs, but Castillo’s feat is reportedly the first successful attempt.

And it happened in Texas, mind you.

“We are kind of looked at as one of the most conservatives cities in the country,” Castillo noted of his home in Lubbock. “I’ve heard of the stories happening of the guy getting arrested for attempting to do the same thing that I was doing so when I walked in there I had to mentally prepare myself to probably gather bond or something to get out of jail.”

While many view the pastafarian movement as strictly parodic and mocking of religion, Castillo says he wore the head-gear for more positive reasons. “I would like to think that it actually opens the doors for new age religion and just it kind of symbolizes acceptance and it kind of celebrates in a sense that we are a melting pot of a country,” he said.

Unfortunately for Castillo, KLBK-TV reports that the Texas DPS has its legal team reviewing the photograph and will contact him shortly.

Watch the report below, via KLBK: