‘Why Do You Hate America So Much’ Piers? Breitbart Editor And Morgan Battle Over Jason Collins Coming Out
VIDEO

‘Why Do You Hate America So Much’ Piers? Breitbart Editor And Morgan Battle Over Jason Collins Coming Out 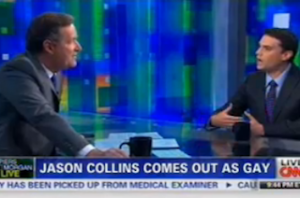 Piers Morgan challenged Breitbart.com’s Ben Shapiro Thursday night to defend the “sneering” tweets he sent out immediately following the news that NBA player Jason Collins had become the first professional male athlete to come out as gay. “Why such a cheap shot against a guy who did a pretty brave thing?” Morgan asked.

Shapiro stuck by his original sentiments, asking Morgan, “why do you hate America so much that you think it’s such a homophobic country, that when Jason Collins comes out it is the biggest deal in the history of humanity and President Obama has to personally congratulate him?”

Taken aback by the suggestion that he “hates America,” Morgan turned it around on Shapiro and said he “may be homophobic” for questioning the bravery it took for Collins to come out.

Shapiro delivered an extended anecdote about how he’s Jewish and wears a yarmulke on TV and despite all of the anti-Semitism in America he doesn’t consider himself a hero. “Being who you are in 2013 in America is what America is about,” he said. “It is not heroic to be who you are publicly. I’m glad for Jason Collins if he feels he’s going to live a happier life now, but it does not make you a hero to be who you are.”

“Come off it,” Morgan shot back. “To have your first thought be to get on Twitter and sneer at him? It’s cheap and abysmal.”