Why Does Geraldo Rivera Really Really Want You To Know Black School Bus ‘Thugs’ Were Black? 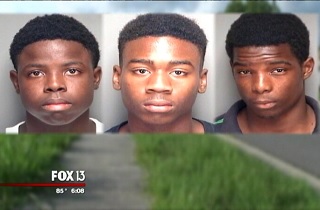 On Thursday night’s The O’Reilly Factor, substitute host Laura Ingraham and Geraldo Rivera chewed over some “new” details in the July 9 assault on a 13 year-old aboard a Florida school bus, and although they never really explained what the “new details” were, Geraldo explained that the three assailants’ blackness was a new detail to him, and a very important one. He posited a “double standard” between this story and the killing of Trayvon Martin, and he and Ingraham concluded that “we (the media) should have reported who they (the suspects) were,” and “faster.”

Ingraham began the segment by reporting the following “details”:

Geraldo added that we are apparently “taking the attacker’s word that it wasn’t racially motivated,” and that he “had no idea that the three attackers were black and the victim, the 13-year-old was white until I finally did see the video.”

He says he read about the story on CNN.com, which embedded the video just above its write-up of the video, as websites will do. Ingraham also lamented the speed with which this story was covered, and Geraldo invoked some sort of “wretched double standard,” alleging that if the races had been reversed, “you would have had a massive movement, Jesse Jackson and Al Sharpton, all the others (all the other what? He doesn’t say), would have been the crime of the century.” (Watch the segment here, if you want to.)

There are many, many problems with this, the very least of which is that Geraldo and Ingraham aren’t reporting any new details, and that both of them would have known this if they had watched that embedded CNN video from three days ago, or this Fox 13 report from July 12:

Let’s examine the “wretched double standard” Geraldo speaks of, because although the school bus beating was reported on immediately, it didn’t become a national story until the surveillance video was released. In the case of Trayvon Martin, the media was “all over it,” as Geraldo says, three weeks after the unarmed 17 year-old was killed, and didn’t become a huge national story until…the 911 tapes were released, almost a month after the killing. Surely Geraldo remembers that he pronounced Trayvon a victim of his own hoodie just three days shy of the one-month mark. Maybe he just thinks of racial victim-blaming as “Wednesday.”

Geraldo also doesn’t seem to remember that Al Sharpton and “all the others” didn’t “move to Florida” because a black teenager was killed, but because his killer was not arrested. If it will make Geraldo feel better, we can see if the Rev will consider demanding an arrest in this case, as well.

But what’s really sickening about this utterly false, ill-informed narrative is that Geraldo never explains why it’s so important to him that we know these assailants were black, and the victim was white (even though we do already know that, and Geraldo didn’t know it because he apparently has top-of-webpage blindness). There are very clearly articulable reasons why the Trayvon Martin case centers around race, but this one appears to have none, other than as a tit for Trayvon’s tat. The motive for the attack is crystal-clear, and has been from the beginning.

In fixating on a racial double-standard that is only a result of his own inept news consumption, though, Geraldo completely ignores the aspect of this story that should be front and center. From Fox 13:

It was apparent retribution after the 13-year-old told Lealman Intermediate School officials that two of the three assailants were selling pot in the school restroom.

Then the suspects were allowed to get on the same bus with the victim.

Why did the school not protect this child’s identity, or failing that, why did they allow these three aboard that bus? What kid, white or black, is ever going to trust their school to protect them if they try to do the right thing, and report criminal activity? That kid wasn’t put in danger because he was white, he was put in danger because his school failed him. Geraldo’s obsession with spreading the gospel of black thugs completely eclipsed his judgment as a newsman, and as a human being.