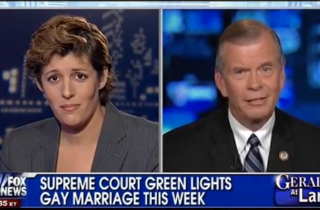 Last night on Geraldo at Large, Fox contributor Sally Kohn and Rep. Tim Walberg (R-MI) got a bit intense while debating the ramifications of this week’s Supreme Court rulings on gay marriage.

Debating what host Geraldo Rivera described as “the brave new world of gay marriage,” Rep. Walberg argued that same-sex marriages, including Kohn’s, simply adds “another impingement upon making marriage the successful foundation point of America.” The procreative nature of marriage, he said, is altered when you “redefine” who can be married.

Kohn pointed out that in the congressman’s own district, there are gay families, single parent households, and grandparents raising children — all of which differ from his traditional definition of family. However, she said, “we protect everyone, we give everyone rights equally.”

Walberg responded that equal protection “doesn’t include redefining words that are very descriptive of a foundational structure of society that goes back to the beginning of creation.”

“Why is it that you allow elderly couples that don’t have children to marry?” Kohn challenged the congressman. “And why haven’t you put forward a bill to ban divorce if you’re so concerned with the preservation of marriage?”

“We have put many hurdles in the way of good marriage,” he responded. “One of those is no-fault divorce. But we’re talking about DOMA. The Supreme Court got it wrong when they said the states should be able to make up their own decisions, their own minds, their own laws.”

Kohn then took a personal tone, noting that there are over 1,000 federal benefits the congressman does not want her to have access to, including tax benefits, hospital visitation rights, and social security inheritance. “You’re saying that we shouldn’t because we’re somehow lesser families?”

“Let’s debate those issues but not redefine marriage as a term,” the congressman replied.

Watch the full debate below, via Fox News: