Christopher: Why Everyone Calling for Martin Bashir’s Head Needs to Pipe Down 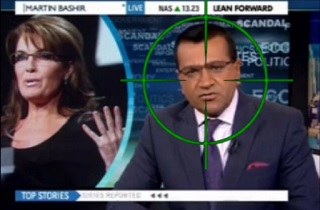 Ten days ago, MSNBC host Martin Bashir delivered a harsh bit of commentary that culminated in the suggestion that someone should shit in former Alaska Governor Sarah Palin‘s (R-AK) mouth.

The world has never been the same since. Despite an abject and complete apology, calls for Bashir’s scalp continued to ring throughout the media and political spheres. It’s easy to see why Bashir makes such a tempting target, but even easier to understand why those screeching the loudest for his head ought to sit down and shut up.

There are two separate issues here, of course. One is whether or not Martin Bashir should be disciplined over his commentary, or should even have apologized, and the other is whether any of the pearl-clutchers demanding such action have standing to throw stones at Bashir. Due to the sheer volume of trolling on Bashir’s remarks, let’s start with the latter.

A better question might be “where aren’t they,” and the answer would be “They’re not cleaning up after a columnist who falsely accused a gay NBA player of hiding a prior engagement, and then corrected that column by crapping on said gay man some more.”

In fact, The Daily Beast was also relieved of that worry when Kurtz went to work for Fox News, where smearing gay people is a feature, not a bug. Sit down and shut up, Howie.

Speaking of Fox News, Bashir has taken a beating from the likes of Sean Hannity, who has led a network-wide attack campaign against Michelle Obama, and Bill O’Reilly, who has gotten into his own trouble for comments about a murdered rape victim and then attacked women who pointed it out. Sit down and shut up, boyos.

Radio host Mark Levin found his inner white knight, chiding Bashir for “picking on women,” although last time we checked, there was only one of Sarah Palin. This is the same Levin who derides Hillary Clinton every chance he gets. Sit down and shut up, Mark.

The right demonstrated, once again, its confusion about what constitutes sexism, asking why the “ladies” of MSNBC haven’t spoken out against Bashir, despite the fact that bashir’s remarks were not gender-specific. Calling someone a slut 33 times is sexist, calling someone a “right-wing slut” once is sexist, and expecting people with vaginae to automatically stick up for other people with vaginae is also sexist. Sit down and shut up, fauxminist concern trolls.

Donald Trump, sit down and shut up.

Rush Limbaugh, who opened his slut-spewing maw to pile on Bashir, sit down and shut up.

Former Bill Clinton Press Secretary Dee Dee Myers tweeted a demand for Bashir’s sacking, even after he apologized. Dee Dee’s former boss, you may remember, got his dick sucked in the Oval Office by an entry-level employee, which would have gotten him fired from a McDonald’s, and didn’t lose his job. I’m not saying he should have, but sit down and shut up, Dee Dee. O-O-K-K?

Morning Joe host Joe Scarborough boasted that “Every time something horrific is said like that, I go in and I talk to Phil Griffin,” except, apparently, when it’s Joe Scarborough slandering people with autism, being talked to about it by Phil Griffin, and then doing it again.

Finally, Sarah Palin accused the network of “executive hypocrisy.” Sit down and shut up, Sarah Palin.

Just because every one of the people calling for Bashir’s firing either has in my opinion done or condoned far worse, or has an obvious ax to grind against the network, doesn’t mean Bashir was right to do what he did, or that he shouldn’t be fired. It’s just irritating as hell to listen to. The same can be said of the fact that, as Evan McMurry pointed out, Palin’s original remarks were far more offensive than Bashir’s provocation.

No, the reason they’re all wrong as well as annoying is that what Martin Bashir did was a form of political commentary that is worthy of protection, even beyond my usual aversion to speech firings. Bashir’s remarks were not simply an attack on Sarah Palin; he didn’t just say that someone should shit in her mouth. If he had, then much of this outrage would be justified, and you’d be hearing it from more than this gang of people who hate MSNBC anyway. Calling someone a “right-wing slut,” for example, would warrant the discipline that these folks want for Bashir, and it was only Ed Schultz’s pitch-perfect apology that saved his career from that brouhaha.

The purpose of Bashir’s commentary was to illustrate, mainly to Sarah Palin, the sick trivialization of her remarks. Bashir described, at length, the barbaric punishments used on slaves, and in the long tradition of political satire, included a provocation that served to amplify that commentary. Just as Swift didn’t actually intend for people to eat babies, Bashir did not literally wish for Palin to be shat upon, or into. Rush Limbaugh employed the same form on Sandra Fluke, not when he called her a slut for three days, but when he creepily suggested that in exchange for birth control coverage on her own insurance, Fluke post videos of the sex enabled by it on the internet. He didn’t mean it literally, and as gross as it was, that was actually satire.

After I wrote up Bashir’s original commentary, people on Twitter asked me if I condemned or condoned it, a question without a 140 character answer. Bashir’s goal was worthy, and his means were legitimate, but that’s not the commentary or provocation that I would have used. Yes, it amplified the underlying message, but at the cost of obscuring it. Palin deliberately referenced American slavery, as conservatives are wont to do, in order to make a trivial point about public debt. She needed to be shown just what it was she was comparing. For too many white people, conservative or not, slavery is one of three things:

In order to cure Palin of her lack of empathy, I would not have chosen the words of a slave overseer. There are thousands of stories in the WPA slave narratives, but one of the more gut-wrenching ones comes from a former slave named Mary Armstrong, who describes, with a horrifying mix of aplomb and anguish, the death of her sister:

You see, my Mama belong to old William Cleveland and old Polly Cleveland, and they was the meanest two white folks what ever lived, ’cause they was allus beatin’ on their slaves. I know, ‘caus Mama told me, and I hears about it other places, and besides, old Polly, she was a Polly devil if there ever was one, and she whipped my little sister what was only nine months old, and jes a baby, to death. She come and took the diaper offen my little sister and whipped till the blood jes’ ran – jes’cause she cry like all babies do, and it kilt my sister.

After reading that, Sarah Palin would surely have to wonder what use a slaveowner would have had for a baby who was disabled, would surely know that our public debt will never be like that, and that saying it will is deeply painful to those who are still scarred by that chapter in our history. Sarah Palin doesn’t deserve the treatment that slaves got, no human being does. The point is that the indelible pain of slavery doesn’t deserve the treatment that Palin gave it, either.