Why Harry Reid Is, And Is Not, An Idiot For Failing To Reform Filibuster
video

Why Harry Reid Is, And Is Not, An Idiot For Failing To Reform Filibuster 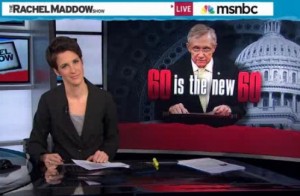 Most of the liberals and other normal people in this country are probably really angry at Senate Majority Leader Harry Reid (D-NV) for passing up an opportunity to reform the filibuster rules that have turned the U.S. Senate into a tar pit where democracy goes to die. On Thursday night’s The Rachel Maddow Show, host Rachel Maddow exhaustively detailed all of the times Sen. Reid promised to end the so-called silent filibuster, and to do so with a simple 51-49 majority if necessary. This afternoon, Sen. Reid chickened out, but he had a good reason to. That reason, though, isn’t good enough.

As Rachel has explained many, many times, the Republican minority has taken filibuster abuse to untold lengths, even engaging in the world’s first self-filibuster (you can go blind from that). Normally, it takes a 60-vote majority to change the rules of the Senate, but according to the U.S. Constitution, it’s possible to change the rules with a simple majority on the first day of a new Congress, and for some reason, the first day of the new Congress lasted several weeks this year. That’s what Harry Reid was supposed to do, but didn’t:

It’s hard to tell, but Rachel was pissed about this. I bet she even thought up real curse-words in her head, because “bull-puckey” doesn’t cut it at a time like this. So, why did Reid cave?

The most common objection to filibuster reform is the notion that no majority is permanent, so if the Democrats take the silent filibuster away from Republicans, the Democrats won’t have it when they are in the minority again. The proposed rule change wouldn’t have eliminated the filibuster completely, though, it would have just made it harder to execute. You’d have to put on a diaper and talk until the rest of the Senate got tired of hearing you, and moved on to something else. If you really wanted to, you’d still be able to stop some heinous bill, but you wouldn’t be able to do it just by saying “I hereby filibuster thee!”

Since Democrats don’t abuse the filibuster, they were all pretty much okay with that rule change. That’s not why Sen. Reid chickened out. Here’s why, as he explained to Ezra Klein:

A second explanation for Reid’s early enthusiasm for reform might be that Reid needed to convince McConnell to strike a deal and that the only way to do that was to scare him a bit. “Whenever you change the rules here,” Reid said, “you have to show the other side you can change them with 51 votes.” It’s the fear of the partisan reforms, in other words, that leads to bipartisan reforms.

Reid understands that his threat cuts both ways. See, the problem isn’t with changing the filibuster rules, it’s with changing the rules at all with a 51-vote majority, because even if Democrats make a perfectly reasonable rule change using the new Congress loophole, there’s nothing to stop Republicans from going nuts when they retake the majority, and giving themselves the right of primae noctis, or making a rule that all Democrats have to resign. That’s why Harry Reid is not such an idiot for backing away from this threat.

Here’s why Harry Reid is kind of an idiot for backing down: there’s still nothing to stop Republicans from going nuts when they retake the majority, and they will. When Republicans retake the majority, if Harry Reid is still in the Senate, we will see him at a microphone in a Republican-mandated propeller-beanie and “I’m With Stupid” t-shirt with the finger pointed up at his face ensemble, complaining about how his learned colleagues have broken with all precedent, and he will not stand for it next time he’s in the majority.

The election of President Obama set off a chain reaction of broken norms by Republicans, which began the night he was inaugurated, and culminated in his reelection by a country that won’t ever go back to being the Republicans’ natural friends. They are desperate, and like cornered rats, they will lash out with frothy fang, and filthy claw.