Why Hasn’t The Media Been Reporting On Or Booking Pro-Gun Newtown Parent Mark Mattioli?

Why Hasn't The Media Been Reporting Or Booking Pro-Gun Newtown Parent Mark Mattioli? 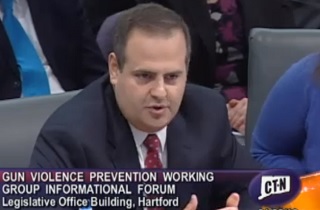 Some of the most compelling voices in the current debate over gun violence are those who have been touched by it, particularly the parents of the twenty children slain at Sandy Hook Elementary School on December 14. It’s strange, then, that one of those parents, Mark Mattioli, has simultaneously been white-washed and virtually blacked out of the media’s post-Newtown coverage. While endorsing the NRA’s plan to arm school personnel Tuesday, Mr. Mattioli urged people to put politics aside, but it appears as though his politics may be a factor in the media’s treatment of him.

At a press conference to roll out the NRA’s 225-page report on school safety, Mark Mattioli praised the plan, and said “I think politics needs to sort of be set aside here, and I hope this doesn’t you know, lead to name-calling. But rather, this is recommendations for solutions. Real solutions that will make our kids safer.”

The clip made the rounds on several cable news shows, including MSNBC Live and Current TV’s The Young Turks. That was the first I had heard of Mark Mattioli, whose 6 year-old son, James, was tragically killed in the Newtown shooting, even though he gave testimony, along with other Newtown parents, at a January hearing of the Connecticut legislature. At that time, the testimony of several other parents received widespread attention, particularly that of Neil Heslin, whose testimony was interruppted by shouts from gun advocates. Mattioli’s testimony, however, received very little attention, and what attention it did get was manipulated to obscure his apparent political views. The New York Times published a piece quoting Mr. Mattioli’s opposition to new gun laws, but softened the more explicitly political portion of his testimony. CNN similarly avoided Mattioli’s politics, while reporting a “divide” on gun control in Newtown.

Fox News was the only cable news channel to air significant portions of Mark Mattioli’s testimony, but in the four minutes of “highlights” they culled, also avoided key portions of his testimony. Since then, none of the cable networks paid any further attention to Mattioli, until yesterday. When he stepped up to praise the NRA plan, once again, no mention was made of his politics. This time around, it’s entirely possible that this was a result of the media’s earlier failure to report on them.

It’s hard to imagin that Cenk Uygur, or The Huffington Post, or TPM, would have failed to mention it if they had seen the portion of Mark Mattioli’s testimony in which he displays hostility toward “the left.”

Speaking about the difference between a machine gun (which gun control laws have been very effective at banning) and semiautomatic assault weapons like the one used in the Newtown mass shooting, Mattioli said “I think there’s been talk about fear in the media, and i think a lot of it’s been from the left, talking about what is a semiautomatic? You pull the triggr one, one bullet comes out.”

“I think millions of women, especially, across this country,” he continued, “do not realize that’s the definition of a semiautomatic gun. And I think there’s been fear, put out by the left, to make people think that what happened in that room on December 14th, it was a spray of bullets.  Well, I’ll tell you, I widh it had been because it would have been quick and over, and I wouldn’t have to deal with the nightmare of what it actually probably was.”

Now, I don’t agree with Mr. Mattioli that millions of women are under the impression that a machine gun was used in the Newtown shooting, or that anyone is confused about the distinction between fully-automatic weapons and those covered by the proposed assault weapons ban, but he raises an interesting point. I don’t know if that’s true, just as I don’t know how many people already think that background checks are required for all gun purchases, or that 100-round magazines are already banned, because even after months of inconsistent polling, no one is asking those questions. If 90% of people favor background checks, and only 47% favor “stricter” gun laws, then 43% of Americans aren’t making a crucial connection, and we still don’t know why. A few months ago, I cited a 2001 poll that showed 70% of Americans already think there’s a national gun registry, even though there’s a federal law against one. I used a 2001 poll because no one has asked since then. Maybe Mark Marttioli is right about public perceptions of assault weapons, too. I’d like to know.

Whether I agree with him or not, though, Mark Mattioli deserves to be heard. I can’t prove that his politics are the reason he hasn’t been, but it’s tough for me to think of another complicating factor. To the pro-gun regulation crowd, he’s an anomaly in a sea of victims they agree with, and maybe someone they’re afraid to disagree with for fear of looking bad. That shouldn’t be the case. Just as I’ve continually insisted that pro-gun legislators should have the courage to look parents like Neil Heslin in the eye, so should those in favor of gun regulations have the courage to engage Mr. Mattioli honestly and respectfully.

For the NRA, Mr. Mattioli is a convenient figurehead to pose as a Newtown parent who kept an open mind, which is how he’s being presented now. It is my suspicion that, if Mark Mattioli’s views were given more exposure by the conservative media, or if he were constantly booked on Hannity, that image would suffer.

I could be wrong on both counts, but it seems to me that politics are factoring heavily into decisions about which voices get promoted, and which don’t. In January, MSNBC featured Neil Heslin’s testimony heavily, while Fox News only reported it as a by-product of their outrage over MSNBC’s coverage of it. At the same time, Fox News played over four minutes of Mattioli’s testimony, while MSNBC ignored it, and CNN barely mentioned it.

I’m not sure if Mark Mattioli has made himself available to the media for interviews, but if so, then cable news shows ought to start booking him. Guns are an inherently political issue, but as Mattioli said at that press conference, we shouldn’t play politics with the safety of our children, and we shouldn’t play politics when deciding which of their parents’ voices we’re willing to listen to.

For a start, here’s the full video of Mark Mattioli’s testimony before the Gun Violence Prevention Working Group of the Bipartisan Task Force Public Hearing: