Why Is CNN Devoting Airtime To Ridiculous Conspiracy Theorists?

Why Is CNN Devoting Airtime To Ridiculous Conspiracy Theorists? 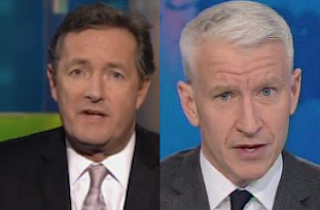 In the past week, Anderson Cooper has twice spent an entire segment of his show on the horrifying, outlandish conspiracy theories over the Sandy Hook shooting. Cooper repeatedly clarified that he wouldn’t normally bring such things up on his show, but he felt the special circumstances about these conspiracies warranted the very public debunking. Conspiracy theories are the kind of things no sensible person should care about, and any reasonably sane human being would discard them without thinking twice. But Cooper is not the first CNN host this month to take on conspiracy theorists on his show, and so the question needs to be asked: why are CNN’s primetime hosts devoting airtime to obviously ridiculous and borderline offensive conspiracies?

RELATED: CNN Panel Gets Heated Discussing Alex Jones: Why Did Piers Morgan ‘Give Him The Air Time?’

I’ll circle back to Cooper in a second, but let’s first talk about Piers Morgan. Purely from a journalistic perspective, I have no problem with Morgan’s advocacy for gun control. I’m not expecting him to be non-partisan or anything, and it’s clear he has a great deal of passion about the issue. But as entertaining as it was, I have to say it was a really bad idea to invite Alex Jones, one of the most notorious conspiracy theorists alive today, on his show. There was obviously a personal element in the invitation; after all, Jones created the petition to get him deported. But nothing really gets accomplished when you’re trying to have a civilized conversation with someone who’s incapable of having one.

The worse part, however, came when Morgan tried to lump Jones in with the pro-gun movement. Jones may have a great deal in common with gun rights advocates, but you can’t just take an insane, paranoid shock jock and make him the representative of the entire movement.

The consequence of Jones being on CNN is that he has gotten far more play in the media than he should. A number of news organizations and sites (including, admittedly, this one) have done reports on Jones and his ramblings and what he’s been saying since the interview. This is akin to giving a platform to the crazy guy on the streets of New York with tin foil on his head who won’t shut up about government-funded UFOs.

Now for Anderson Cooper’s reporting. I’m a little more surprised that he’s engaging in the conspiracy theory game, given that his “Keeping Them Honest” segment is generally reserved for politicians and people in power. The “anonymous internet trolls” Cooper is going after only have power if people like Cooper do segments about them on national television. I understand that he is particularly passionate about this, given that the victims of these conspiracies are family members of Newtown victims who have suffered enough and do not need these kind of horrible things being said about them.

Cooper made the case that this warrants national attention because a tenured professor at a public university is pushing the same garbage. I concede that point, but overall I do not understand how bringing attention to the horrible, offensive, and completely false conspiracies being pushed on the internet accomplishes anything. The best thing you can do in response to a troll is to ignore it or else they will keep trolling, and the trolling will get more insane and creative as time goes on.

Much in the same way some people in the media believe publicizing the name of a shooter is irresponsible because it gives them the publicity they do not deserve, publicizing the ramblings of crazy people only gives them unwarranted publicity, especially on a national cable news network.