Why Is CNN Spending So Much Time on Missing Malaysia Airlines Flight?
VIDEO

Why Is CNN Spending So Much Time on Missing Malaysia Airlines Flight? 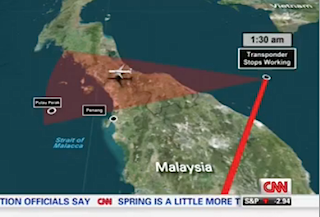 If you have been watching CNN over the last several days, you may have noticed the network’s near wall-to-wall coverage of the mystery surrounding the missing Malaysia Airlines flight 370, which disappeared somewhere near Southeast Asia last Friday. Much in the same way the network put all of its focus into the crisis in Ukraine the week prior, CNN has been ignoring most other stories to report on the missing flight even when no new information is coming in and it seems like speculation is the only option.

Perhaps in an attempt to address these concerns, Chris Cuomo, who was filling in for Ashleigh Banfield during the 12 noon ET hour Wednesday, defended CNN’s coverage of the story by stressing that it’s just as important to ask questions as it is to give answers when something like the disappearance of the plane carrying 239 people occurs.

Below is the transcript of Cuomo’s remarks:

“Often in a situation like the mystery of Malaysia Airlines Flight 370, the job is to have more questions than there are answers, because simply not enough is known. So if it seems like we’re nibbling around the edges, it’s because we are. If it seems like you’re trying to avoid the suggestion of speculation, it’s because you have to. Because the facts often will lead you in the right direction and until you have them, you can just be as scattershot as the theories and ideas that we’re hearing about where this plane may be. But the bottom line is the authorities and those who are supposed to know simply do not. So we monitor the situation as best we can, learning it what we can as we go along. One way to do that is being everywhere the story is, and that’s what CNN is doing on this and every story.”

From there, Cuomo introduced yet another segment that “nibbled around the edges” of the story without revealing any further concrete developments. Judging by CNN’s ratings during its Ukraine coverage and this week with the Malaysia Airlines focus, the strategy of “being everywhere” on one specific story appears to be paying off, at least to some degree.