Why Is It News That Orlando Shooter’s Father Went to Hillary Rally?
Opinion

Why Is It News That Orlando Shooter’s Father Went to Hillary Rally? 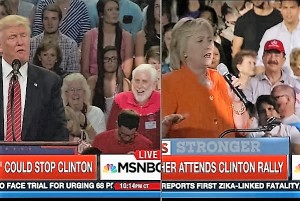 The uproar surrounding Donald Trump’s “Second Amendment people” remark has rightly blotted out the sun for the past 24 hours or so, but not for lack of trying by the news media and/or Trump apologists. In their never-ending quest for neutrality masquerading as “objectivity,” the media spent way more time than was necessary on Tuesday reporting on the fact that Orlando shooter Omar Mateen‘s father Seddique Mateen photobombed a Hillary Clinton rally on Monday.

As others have pointed out, your CNNs were busy calling this meaningless thing that was completely beyond anyone’s control an “unforced error” and devoting more airtime to it than it would have deserved on a holiday weekend, but for my money, the worst offender was MSNBC, which covered the story at a lower count than CNN, but more than made up for it in presentation. Here’s how Chris Matthews covered it on Tuesday night’s Hardball (pay special attention to the segue):

Get it, folks? See how Trump joking about the assassination of Hillary Clinton is pretty much the same thing as a guy showing up to a rally that no one could possibly have prevented him from showing up at? Both sides!!

Not only is there almost no reason at all to report on Mateen’s attendance at Hillary’s rally beyond the merits of his own publicity-seeking, there is exactly zero reason to include it in a segment about Trump’s remark, unless you’re either trying to draw a false equivalence between the two, or are actively trying to become a living CNN Decoder Ring, because that’s also why CNN covered it, and why they bring up Hillary’s weak polling internals every time Trump craps the bed.