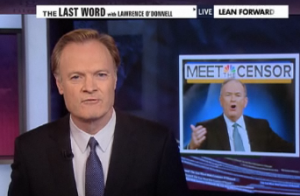 Continuing his recent idea of treating time-slot competitor Bill O’Reilly as a laughable sitcom character, MSNBC‘s Lawrence O’Donnell unleashed on O’Reilly with the help of Media Matters founder David Brock. O’Donnell’s weird insults began with saying “Bill O’Reilly the actor is a little bit smarter than the character he plays on TV,” and from there the charges against O’Reilly only became increasingly dubious.

O’Donnell alleged that O’Reilly’s outrage (regarding David Gregory‘s questioning Speaker Boehner about President Obama’s religion) was absurd when FOX News is where the question of whether Obama is a Muslim originated. O’Donnell argued, “Fox News took up its own valuable airtime to cover something the O’Reilly character says shouldn’t be covered.” And Brock insisted that Fox News and pollster Frank Luntz continue to stir the pot in order to help make people think Obama really is a Muslim. All of these arguments seem interesting, too bad they are plagued by the simple fact that they are entirely untrue.

First of all, the Luntz focus group of Republican voters, where last week’s “Obama is a Muslim” theory resurfaced, appeared during Hannity, and not during The O’Reilly Factor. In other words, just because Sean Hannity covers a topic, it doesn’t mean O’Reilly is forbidden from criticizing it. Secondly, even during this panel, Luntz did not provoke the crowd to get them to believe Obama was a Muslim. Instead, Luntz just allowed the focus group to reveal what they truly believed. If a sizable number of Republican voters wrongly believe Obama is Muslim, then Fox News displaying that belief is not “stirring the pot,” it’s called reporting. O’Donnell similarly was confused about what Boehner’s role should be:

“John Boehner spends his entire working life trying to convince Republicans to think his way on taxes and spending . . . but he won’t say a word about the President’s birth or the President’s religion, if people want to be wrong about that, that’s not John Boehner’s job to say anything about.”

As long as Boehner and Fox News are not actively promoting the idea that Obama is Muslim (which they are not), it’s unclear exactly why O’Donnell and Brock think it is Boehner’s and Fox News’ responsibility to essentially serve as Obama’s public relations team and force everyone to stop believe something?

Finally, O’Donnell does sneak in a somewhat insightful point about O’Reilly suggesting “he brings right-wing nuts like Laura Ingraham on and gets to say to them ‘oh you just hate Obama’ so he gets to look like the reasonable guy in this thing.” Given that O’Reilly calls the theories that Obama is a Muslim crazy, wonders why any reporters waste time asking about them, and says he doesn’t hate Obama, maybe O’Reilly actually is a reasonable guy. Instead, with such passionate attacks on O’Reilly, doesn’t it seem like if anyone’s acting, it’s O’Donnell channeling Keith Olbermann?