Why Isn’t Anyone Talking About The New Zealand Mining Disaster? 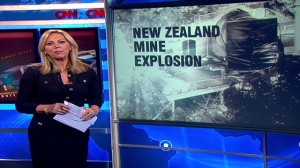 Last week, an explosion in a New Zealand mine stranded more than two dozen miners below ground. CNN is now reporting that all 29 of those miners are dead—as the official in charge of the attempt to rescue the miners told reporters, “There was another massive explosion underground, and based on that explosion, no one survived.” It’s a dramatic, unspeakable tragedy—so why isn’t it getting more media attention?

When 33 miners were trapped underground in Chile earlier this fall, the story of their plight—and eventual rescue—was inescapable. Cable news coverage of the miners’ liberation was so over-the-top that it prompted Jon Stewart to devote a full ten minutes of his show to mocking the coverage’s hilarious lowlights. The miners will be making a special appearance on the CNN Heroes special this year; Spike TV has also announced that it’s developing a new reality series about coal mining in response to rescue in Chile. There have even been rumors—ultimately unfounded—about Brad Pitt‘s production company making a movie based on the miners.

The situation in New Zealand, by contrast, has barely registered on the cable news landscape—at least in the States. Why such disparity?

For one thing, the Chilean crew was trapped for over two months, while the New Zealand miners were missing for five days. That gave the Chilean story time to develop and take hold. There were more sensational elements to the Chilean case as well—remember Yonni Barrios, whose wife and mistress met when both arrived at a vigil holding his picture? Finally, a story about the triumph of the human spirit may simply make for better television than a tale of a mine explosion that has a horribly sad ending.

Even so, it’s jarring that a just five weeks after a mining disaster was the biggest story on TV, a similar saga has received little attention. Get the details on New Zealand at CNN.com.