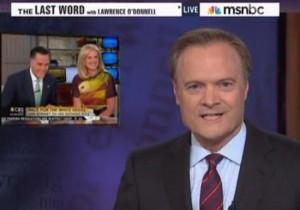 In the final segment of Wednesday night’s The Last Word, host Lawrence O’Donnell bought himself a headache the size of a four-car elevator when he attacked the $990 t-shirt that presumptive Republican nominee for First Lady Ann Romney wore during an appearance with husband Mitt Romney on CBS This Morning. O’Donnell called the shirt “yet another example of how out of touch the Romney family can be with how 99% of Americans live,” adding, “it’s a really ugly t-shirt.”

MSNBC contributor Meghan McCain was on hand to valiantly try to defend Mrs. Romney, citing First Lady Michelle Obama‘s frequently-stylish (and pricey) wardrobe habits, but both O’Donnell and panelist Jonathan Capehart of The Washington Post pointed out that there’s no comparing them as a matter of degree, frequency, and perception. All of which is true, none of which matters.

Meg also pointed out that she is a member of a family that was demagogued over their wealth during the last presidential campaign, but ended up recommending white blouses and jeans for Mrs. Romney from here on out. Meg, you should have been saving Lawrence from himself.

I say this because I care: why, Lawrence, why? Didn’t you see what happened to Hilary Rosen, who didn’t even attack Ann Romney? Are you prepared for the deluge of tweets with the hashtag #WawrenceOnWomen, or the bleating of faux-outraged conservative pundits, or the parade of White House and campaign figures distancing themselves from you? Is President Obama going to have to stop watching reruns of The West Wing now?

Of course, the answer to all of those questions is probably “yes,” given O’Donnell’s pugnacious style, but I honestly don’t think there’s a bottle of Excedrin big enough to make this all worthwhile.

Look, I get it, the Romney’s are super-dee-duper-rich, as the brief montage you showed demonstrates, and Mitt Romney hasn’t quite figured out how to seem comfortable with it, or any of our Earth customs, for that matter. It’s true, also, that Ann Romney’s terrifying $990 shirt looks like it’s about to reap your soul, but she’s the candidate’s wife, she’s supposed to be off-limits, and she should be. In fact, women’s dress ought to be off-limits, too. I’m no Sarah Palin fan, but the brouhaha over her wardrobe was silly. She didn’t decide to spend $150,000 to make her look like the curator of the Michael Jackson Library, the campaign did, and honestly, women, especially highly successful women, are held to a much higher sartorial standard than men. We get a pass as long as we take our socks off to let them cool down once every couple of days.

As far as the Romney’s spending habits go, I don’t really think it matters. As Chris Matthews always points out, we almost always elect a rich guy (granted, not this rich), but most of them figure out how to make us comfortable with it. It’s kind of a no-win situation. When Romney does pinch pennies, it comes off as pandering and insincere, although it would piss me off even more if I knew he was an authentic cheapskate.

But where Ann Romney is concerned, I don’t care if she wears a coat made of gold-dipped, live chinchillas stitched together with thread spun from the manes of slaughtered dressage horses, you are not to utter a single syllable. And that’s tonight’s rewrite.