Why Libertarians Should Embrace Glenn Beck 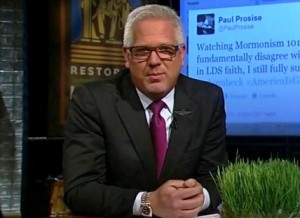 Former Fox News host, co-founder of The Blaze, multi-millionaire, author, radio host and conservative opinion leader, Glenn Beck, infuriated libertarians recently when he floated the notion that his network could embrace libertarian principles and advance the cause of limited government. While Beck’s libertarian credentials are less-than-stellar at present, the reaction that Beck’s trail balloon inspired among libertarians was a resounding and unmistakable. “No thanks” – often prefaced with varying epithets – approximates the libertarian response to Beck’s overture. One has to ask: Why does the prospect of having a high profile champion in the media, something the present libertarian movement lacks, irk rank and file libertarians so?

After the 2012 elections, Beck came to terms with the fact that the uncompromising values-based policy espoused by social conservatives is an electoral loser. Beck, recently moved by a conversation with entertainer and outspoken libertarian, Penn Jillette, has become infatuated with libertarianism as a possible way out of the Republicans electoral predicament.

I will cite my colleague Andrew Kirell, and allow him to speak for most libertarians, when he politely asked Beck to “please” not call himself a libertarian.

You’re free to call yourself whatever you want. But that doesn’t mean we should accept you. While we agree with you on some of the big picture — government spends way too much money it doesn’t have, and is far too intrusive into our daily lives — many of us dislike your rhetoric and your chalkboard-and-puppets conspiracy version of history.

Kirell lists a number of Beck’s past positions, many of which border on conspiratorial anti-government paranoia. Kirell suggests that Beck’s transformation a libertarian would be a burden on the movement, and would force libertarians to spend precious political capital in defense one of their own when Beck goes off the reservation.

You’ve built a reputation as yet another right-wing firebrand who absolutely detests President Obama and will link anything and everything to his kneeling nightly before a Karl Marx statuette. It’s not the kind of baggage to carry around when dealing with libertarians who pride themselves on equal-opportunity skepticism of partisans on both sides who suffer from “President From The Other Party Derangement Syndrome.”

This sentiment was echoed today by libertarian Outside The Beltway blogger Doug Mataconis: 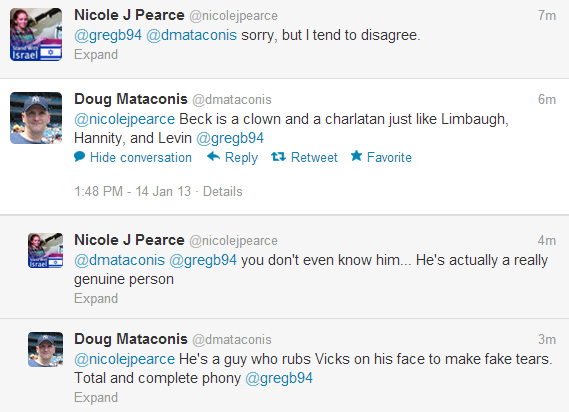 Buried within their principled objections to Beck’s overture towards libertarians is the suspicion that Beck would use his newfound libertarianism to co-opt the movement, or, worse, profit from marketing their small government message.

The assumption seems to be, however unspoken, that Beck’s motives are malicious. His intention is to co-opt and subvert the libertarian movement, force it to abandon its principles and harness its ideological appeal among young voters for his own base aims. If that is their thought process, it is an unwitting admission by libertarians of their own powerlessness.

Why is it unthinkable that this process could work the other way around? Why is Beck the co-opting force in this relationship and not the millions of committed libertarians he has now embraced as his support structure? Beck risks far more by deviating from professed libertarianism once he rebrands his network as a pro-libertarian group than he does as a conservative merely flirting with limited government.

In fact, libertarian opinion leaders would have far more leverage over Beck than he would over them. It is Beck who would have no choice but to be deferential to the movement’s thought-leaders, lest his high profile gambit backfire and rob him of credibility.

Would he deviate from libertarian orthodoxy? Of course, he would. Big tent parties in the United States, with broad ideological appeal and broader influence, foster discussion and debate among their members. This is the highly distilled essence of American democracy. Ideological orthodoxy is a demand made by authoritarian movements on their members – a feature that no one seriously attributes to libertarians.

So, what is in this deal for libertarians? How about the full force of The Blaze network, with its broad readership and nationwide network of television studios? Or the force of personality of a man who drew an estimated 90,000 loosely affiliated or disaffected conservatives onto the National Mall in 2010 to protest big government? When Beck plans something like a $2 billion libertarian compound — which he is — is it not better to be on the inside of Beck’s organization to influence how that is made manifest rather than rail against it’s existence from the outside?

Beck, too, has much to gain and little to lose from this alliance. With his influence depreciated from the height of the tea party movement of President Barack Obama’s first term, Beck commands a much smaller audience than he did at Fox News. Rebranding as a libertarian injects new life into Beck’s career and creates new curiosity in the press about his appeal and his messaging.

But let’s not kid ourselves – libertarianism remains a minority within a minority. Too few libertarians ask why this is the case, given how the vast majority of American voters favor small government and a limited American role abroad. My suspicion is that there is a reason for this: and it can likely be found in the comments below this article.

Libertarians, by and large, are fiercely protective of their independence and do not approve of being told what is best for them. An even greater sin is to suggest a political course of action which may subvert principle temporarily in favor of added relevance. The “big L” Libertarian Party has rejected this kind of compromise for the better part of my lifetime and many of the “little L’s” agree. The latest example of this lamentable impulse is the libertarian movement’s full-throated rejection of Beck’s outstretched hand of friendship.

Until Libertarians learn to form alliances in the name of political expediency, they will continue to enjoy their present level of influence over U.S. policy making – that is to say, none.