Why NBC Shouldn’t Even Think About Firing Brian Williams

Why NBC Shouldn’t Even Think About Firing Brian Williams 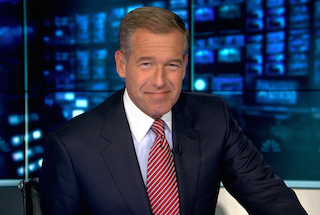 Less than two months ago, NBC News re-upped Brian Williams’ contract for the next five years at an estimated cost of $10 million per year. And despite everything that’s gone down over the last few days, he will likely stay in his current role as NBC Nightly News anchor through at least 2019. As it should be.

While the media narrative surrounding Williams’ admission that he exaggerated aspects of reporting trip to Iraq during the 2003 invasion has largely framed the anchor as cravenly self-aggrandizing, his reputation around NBC is that of a generous team player. During his ten years as the network’s leading newsman, Williams has not only maintained a spot at the top of the nightly ratings, averaging close to 9 million viewers a night this season to date, but he has also managed to develop a track record as someone who will relentlessly make fun of himself at every opportunity.

More than anyone else, Williams is the face of NBC, and not just its news division. Besides his “Slow Jam the News” segments and edited rap songs on Jimmy Fallon’s show, Williams has also leant his talents to other NBC properties by hosting Saturday Night Live and appearing on 30 Rock.

After the tragic fall of David Gregory, NBC really cannot afford to cut Williams loose. They’ve already installed Chuck Todd on Meet the Press — who would they even consider as his replacement right now? Just for argument’s sake lets examine this question. With Diane Sawyer out of the anchor chair at ABC, choosing a woman would be a smart move. But Savannah Guthrie didn’t exactly impress with her softball Obama interview before the Super Bowl and Andrea Mitchell isn’t exactly ratings gold on MSNBC.

For all those reasons, NBC News president Deborah Turness is probably loathe to fire Williams, despite the voices who are calling for his head (or denying that they are calling for his head in the case of Tom Brokaw). When polled, 70% of our readers said NBC should fire Williams. But frankly, I’m pretty sure that if we asked that question about almost any working news anchor, at least 60% of you would want them off the air.

But should she do it anyway for the sake of NBC News’ integrity? No. And here’s why.

For some, the Williams saga has brought to mind other formerly-trusted newspeople who were brought down by things they said on air that turned out to be untrue. There was CBS News’ Dan Rather, who lost his position on that network’s evening newscast after using fabricated documents to dispute President George W. Bush‘s National Guard record in 2004. More recently, 60 Minutes’ Lara Logan was put on extended leave after interviewing a man who falsely claimed to have been on the scene of the 2012 Benghazi attack.

In both of those cases, the reporters in question failed at their jobs. They presented reports that viewers believed were meticulously researched and vetted but turned out to be based on lies. It is quite likely that neither Rather nor Logan intended to mislead viewers with their respective pieces, but it also seems apparent that their personal biases may have clouded their judgement and made them want to believe stories that were easily disproved.

Those scenarios are markedly different from the one Williams is dealing with today. When Williams first reported on his Iraq experience from overseas in 2003, the facts were delivered as they occurred — no exaggerating about being in a helicopter than was hit with an RPG. But as he retold the story over the years, to David Letterman or to Alec Baldwin, the truth started to slip away.

Even if Williams didn’t simply “conflate” two events in his head and was actually trying to prop himself up by exaggerating his wartime experience, he wasn’t doing it as Brian Williams the NBC Nightly News anchor, but rather as Brian Williams the man who may have legitimately thought he was going to die while flying over a war zone during the Iraq invasion. He didn’t get someone else’s story wrong, he got his own story wrong. And that matters.

Notably, Williams only felt the need to publicly apologize for the time he told the false story on air during NBC Nightly News last week. The fact that he did not acknowledge Wednesday night that he had repeatedly exaggerated the story over the years has led several media critics to say that his apology did not go far enough. But the reality is that in his role as news anchor, Williams relayed the false story once and then apologized for that time and that time only.

As the various accounts told by the men and women who may or may not have been flying with Williams on that day in Iraq have shown, memory isn’t perfect and war stories tend to get exaggerated over the years. Because of this, Williams deserves the benefit of the doubt.

Regardless of how many times he exaggerated this one story over the years, it should not cost him his career. He is still really good at what he does.

Of course, if viewers revolt and NBC Nightly News drops to third place in the ratings next week, Williams should probably start looking for another gig. Who knows, maybe Jon Stewart would be willing to switch places with him?