Why Now, More Than Ever, Libya Needs Journalists 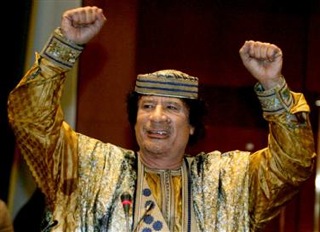 Dictators have the darnedest luck. The Russian government would have likely gotten in a fair bit of trouble for invading neighboring Georgia in 2008 if everyone, including President George W. Bush, wasn’t too busy slappin’ booties at the Beijing Olympics. In 2009, the deaths of protesters in Iran over the legitimacy of their elections was silenced by the passing of Michael Jackson. And now, it seems, Libya’s elderly Caligula Muammar Gaddafi seems to have lucked out as well, with a devastating 8.9 magnitude earthquake shifting the epicenter of all media coverage to the other side of the world: Tokyo, Japan.

What Americans went to sleep believing to be the most tragic news story of the season became a mere footnote in the history books for 2011 by the time they woke up, and along with their interest in Gaddafi’s human rights abuses went the lives up an innumerable number of Japanese residents and even a small number of Americans unfortunate enough to be swept in the aftershocks on America’s West Coast. Anderson Cooper, bags packed for Libya, tweeted yesterday he was on board a plane to Japan. He was hardly the only one to take a journalistic detour. Christiane Amanpour, Greg Palkot, and Ann Curry, among many others, are heading to the island nation for live coverage. And while it’s easy to spot the millions of losers in this disaster of epic (literally) proportions, if the international media let their ADD get the best of them, there stands at least one obvious winner: Muammar Gaddafi.

Being an autocrat in the post-internet world is serious business. With the eyes of the world following your every move, the civilized world is far more adept at spotting and stopping leaders who intend to make their names off of raping and pillaging their people. There are myriad theories for how dictators are coping with the 21st century and, particularly, the advent of the internet. In post-communist states (and, yes, Iran), many leaders have adapted to something called competitive authoritarianism (or illiberal democracy, to use Fareed Zakaria‘s generous term), where sham elections and a faux free press keep the international community at bay. Not all autocrats are tech-savvy or sophisticated enough to pull it off, however– particularly those installed in the years long before mass media was a near universal. Many are just starting to adapt to this fairly new regime trend, Gaddafi among them. Except in Gaddafi’s case, his rustic propaganda system simply can’t compare to Vladimir Putin’s in Russia or Hugo Chavez’s in Venezuela, and so he must resort to silencing the international press, massacring the opposition, or both.

But this time he got lucky, and the international press appears on the cusp of silencing itself on the Libyan situation. After all, Libya’s paltry 6 million people pale in comparison to the hundred million in Japan, meaning Gaddafi doesn’t even have enough people to kill make a dent in the inevitably astronomical death count in Japan. It isn’t the first or last time a manmade injustice gets eclipsed by a natural disaster, or even just a more marketable natural occurrence (like a celebrity death). In fact, dictators often wait for “blackout periods” in which to clean up the opposition and tidily erase them off the face of the earth, under the philosophy that if an opposition leader is killed and no cameras are there to cover it, it didn’t really happen. In the dark, the opposition doesn’t stand a chance.

That’s not to say that the unspeakable horror the Japanese people are currently experiencing is not newsworthy. Certainly nothing at this time can possibly be more newsworthy than a country having thousands of citizens swept away by the tide overnight, and the home of Hiroshima and Nagasaki being hours away from what threatens to be their own personal Chernobyl (Chernobyl, incidentally, caused the damage of 300-400 Hiroshimas). However, as helpless as those of us watching felt in the early hours of Friday morning watching CNN air a tsunami ravaging the Japanese countryside in real time, that sentiment need not apply to the potential genocide Gaddafi could get away with when the cameras stop rolling.

It is still far too early to blame the international media for letting Libya down, but it has occurred to so many oppressed nations on so many occasions that the risk remains significant, and the odds are against Libyan democrats. Cooper, to his credit, has promised to keep an eye on Libya, even while on the other side of the world. The Libyan people deserve no less from the freedom-loving journalists that earned their daily bread this past month on their suffering. Freedom of expression can’t stop tsunamis. It can’t stop nature. But it could mean life or death for those fighting for liberty in a country that hasn’t known it for decades.