‘Why Show Up?’ Fox Hosts Dig Into Eric Holder’s ‘Charm Offensive’ As News Outlets Bow Out Of Meeting
video

‘Why Show Up?’ Fox Hosts Dig Into Eric Holder’s ‘Charm Offensive’ As News Outlets Bow Out Of Meeting 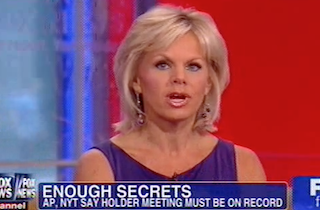 With several news outlets refusing to attend the meeting with Attorney General Eric Holder if it isn’t on-the-record, the Fox & Friends hosts also chimed in. Not nixing the chance that Holder — who “is fighting for his political life” — may come clean and be truthful during the meeting, they questioned whether we’d even find out. Though there’s a good chance it would be leaked regardless of the off-the-record rule.

The New York Times, the Associated Press, and CNN said they will not be attending — while POLITICO, the Washington Post, (and Fox News?) are. Gretchen Carlson, for one, understood the decision to decline the invitation.

“First of all, you know it’s just going to be lip service by Eric Holder,” she noted. “And if you can’t say what he actually said, then why show up?”

Steve Doocy posited that Holder may perhaps tell the truth, leading him and Brian Kilmeade to further realize that even if that’s the case, the journalists in attendance can’t report on it. “If he makes a great off-the-record case for doing what he did, but the New York Times and the Associated Press can’t report it, did it happen?” he asked.

In the end, however, Carlson predicted the remarks will become public. Therefore: If the NYT and the AP don’t show up, “somebody’s probably going to leak what happened inside this meeting, and then the AP and the Times can report it — because they weren’t there.”

Going in circles, Kilmeade questioned whether that leaker would then be investigated by the Justice Department.