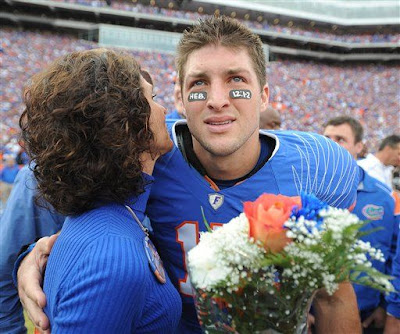 The Super Bowl story of the week, overshadowing the miraculous rise of the New Orleans Saints, is the brewing controversy over the approval by CBS of a 30 second ad sponsored by Focus on the Family to be played during the fourth quarter of the Feb. 7 game.  The ad will feature University of Florida quarterback Tim Tebow and his mom talking about the fact that she was encouraged by doctors to abort the pregnancy that resulted in Tim’s birth.

Progressive bloggers and activists have criticized the decision, calling Focus on the Family “an anti-equality, anti-choice, homophobic organization” and suggesting that the pro-life ad will offend viewers and harm women.  They’ve also said that CBS has previously rejected issue ads and therefore the ad by Focus on the Family should not change that precedent.  CBS argues they have a new policy towards advocacy ads and that Focus on the Family just happens to be the first benefactor of that changed policy.

Whether CBS has changed its policy or not, allowing Focus on the Family to run its Tebow ad is a good thing, even if you don’t agree with the ideological position of the spot.  Here’s why:

Issue Ads are Good for the Viewers and the Advocacy Groups
People think about and discuss controversial issues, even during the Super Bowl. There’s no reason to pretend that people take off their ideological hats when they don a Cheese-head or favorite team jersey.  So why pretend that the Super Bowl has to be a five-hour, ideology free-zone?

Advertisement is about selling a product or an idea.  Whether it is Doritos or not having an abortion, they are meant to persuade or at least entice. So why does an ad that encourages people not to have an abortion worse, for instance, than ads encouraging people to drink beer or be a day-trader? Even if you don’t agree with Focus on the Family’s agenda, is their agenda more perilous than those of Anheuser-Busch or Audi?

Setting a precedent with the Focus on the Family is also good for advocacy groups.  If they can find the money, they can buy an ad that supports their agenda. While it may make sense to draw the advertising line at political ads—and there is an argument that even that ad doesn’t need to be drawn—there’s no reason to limit advertisement to products and services.   Think of the possibilities that open up when 98 million viewers—many in hard-to-reach demographics—can finally see your ad pitch for gay rights or domestic violence prevention.

Bob Garfield, Ad Age ad critic and host of On the Media, told the Washington Post that he’s surprised CBS is willing to offend viewers, but says he doesn’t think it will result in a viewer revolt. “I’m not expecting America, or even half of America, to throw their large screens out the window,” Garfield told the paper. “Most years after the Super Bowl, the winning quarterback thanks Jesus . . . but that doesn’t seem to depress the appetite for sports championship. I don’t think this Tebow situation is going to be that big of a deal.”

Being Inconsistent is Not A Good Reason to Drop the Ad
While it is fair to accuse the CBS of being inconsistent in allowing the Focus on the Family ad while previously rejecting other “issue” ads–most famously the 2004 United Church of Christ “bouncer” ad promoting religious tolerance and diversity—inconsistency is not a good reason to stop the pro-life ad. CBS should have allowed the UCC ad because it was not inflammatory, which is the same reason they should allow the Tebow ad.