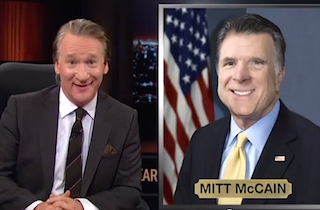 After a midterm election in which barely one third of eligible Americans showed up to vote, Bill Maher decided to dedicate his final “New Rule” of the night to his view on why voting matters. If less people had voted in the last two presidential elections, he posited, we could have ended up with President Mitt McCain.

, in which he tells young people not to vote “because the system is so awful and so dirty that the only solution is to bring it down — not by violence, but not by voting either. No, by some sort of spiritual awakening.”

“Oh for fuck’s sake, fine. You know what? Don’t vote,” he said. “But don’t dress it up as something noble or sophisticated. The fake excuses offend me.”

To illustrate his point, Maher imagined the “alternative reality” in which Obama lost twice and instead we had President Mitt McCain, who never would have implemented the stimulus or saved the auto industry. “Instead of Sonia Sotomayor and Elena Kagan on the Supreme Court, we have Paula Deen and Joe the Plumber,” he said. And “the attorney general is Dick Cheney’s head.”

“Keep telling yourself that because politics is dirty, so very dirty, that you, precious, by not voting or informing yourself or participating in any way, are clean,” Maher concluded. “If your hands aren’t dirty, it’s not because you’re pure. It’s because you’re not helping.”