Why Did Bloomberg Speculate The Times Sq. Bomber Was ‘Homegrown’? 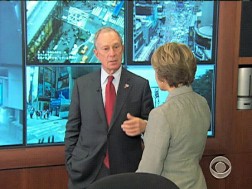 The New York Times took a cursory glance at how the early news of Saturday’s attempt to car bomb Times Sq. turned out to be largely inaccurate, mostly as a result of a number of officials telling the press there was no evidence that it was “anything other than a one-off.”

The authorities had given no indication that they knew enough details to say any more about who might have been responsible for parking the vehicle in Times Square or what the motivation might have been. But the officials conveyed essentially the same message: It was an isolated threat, and the authorities were on top of it.

Homeland Security Secretary Janet Napolitano appeared on a number of Sunday shows this weekend and repeated the claim that, thus far, there was no evidence that Times Sq. bomber was connected in any way to outside groups or had help. This is turning out to be wrong, and has warranted a gentle hand slap from the Times who worries that early public statements were not as accurate as they could have been. I’m not sure what she was supposed to say — nothing doesn’t seem like an option in our media age. Moreover, early reports apparently suggested this was true and if she hadn’t said something at least reasonably based in reality the overwhelming need for information might have produced some overreaching conclusions. Oh wait, that did happen. But it wasn’t from Naplitano, it was Mayor Bloomberg.

This is what Bloomberg speculated last night on CBS Evening News. And I mean this is some serious, totally unwarranted, speculation:

If I had to guess twenty-five cents this would be exactly that, somebody who’s homegrown, maybe a mentally deranged person, or somebody with a political agenda, that doesn’t like the health care bill or something.

No. No to all of it. His entire speculation was so wide of the mark it’s the sort of thing one might expect from a local news ‘man on the street’ report. And why was he speculating? He is the mayor of New York City. It is his job to lead with facts, not speculate. Of almost anyone involved in this situation, including, I would argue, the President, he should know better. Despite his multitude of faults Giuliani would have known better. This was just silliness, and irresponsible, and utterly questionable decision-making on the Mayor’s part. And something he should address pronto. Also? Why didn’t Katie Couric call him on this immediately? Why didn’t she stop him and say ‘is any of what you are saying based in fact?’ Instead she appears to help him with his phrasing. If the Times wants to question early news they should look to the mayor first.