Why Won’t Pres. Obama Be Nicer To His Poor Relatives, Wonders Sean Hannity 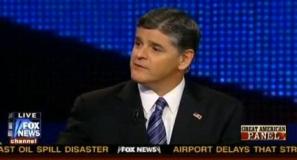 Sean Hannity talked with his Great American Panel last night about the fact that Pres. Barack Obama‘s aunt was granted asylum to stay in America.

But this wasn’t really about immigration. No, it was about how liberals never seem to help their poor relatives.

At the very least, it started with an attempt by Hannity to tie the segment to immigration. “Barack Obama criticized the Arizona immigration law,” said Hannity. “His own aunt defied this law, we don’t hear a peep from Obama.”

But Hannity transitioned to his main point, while tying in the weeks-old story of Bill and Hillary Clinton’s niece living on food stamps. “We just found out Roger Clinton‘s daughter was needing government assistance and I’m thinking, ‘the Clinton’s are millionaires, they couldn’t help out?'” asked Hannity, before turning to Obama. “He made millions of dollars off his books, he couldn’t help out his own aunt who’s living in public housing?”

“Sean this is old news,” said guest Caroline Heldman, who reminded Hannity Pres. Obama’s aunt was a story during the 2008 election.

“How come the rich millionaire Clintons and the rich millionaire President couldn’t help out their poor niece and poor aunt?” asked Hannity, and later underlined his take with this great talking point Frank Luntz would be proud of. “Liberals are really generous…with our money, but when it comes to the their own families, like in the case with the Clinton’s…”

Hannity wants viewers to know conservatives are more generous than liberals. Fine – it’s somewhat unprovable and certainly is a unique slam on liberals. But the hypocrisy in this particular case is if Pres. Obama was helping out his aunt in the way Hannity seems to want him to, he would be attacked that much more by Hannity and those politically like him who say he’s providing a safe haven for his illegally-in-America relative. It’s lose-lose for Pres. Obama when it comes to pleasing Sean Hannity. Of course, this isn’t breaking news.