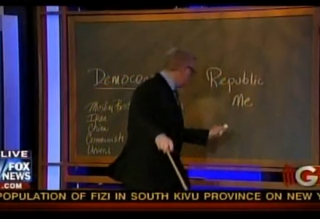 Glenn Beck has been having a field day lately, what with the protests in the Middle East, the full-blown revolution in Egypt, and the union revolts here at home in Wisconsin. Today was no different, as he called out the “dope-smoking hippies” taking over Madison. But among the most dangerous calls, he warned, were those for “democracy.” Fortunately for Beck, it’s more complicated than it sounds upon first listen.

For Beck, “democracy” is not, he explained, “one man, one vote”– though he agreed with that concept through and through. Instead, he perceived the use of the word “democracy” as it has come up lately as a synonym for “mob rule.” No wonder, he argued, that everyone from the Muslim Brotherhood to Hugo Chavez are calling for it. In fact, the list of people calling for “democracy” reads as a Greatest Hits of Beck’s favorite people to hate: Iran, China, communists, unions, students, Hollywood, and, of course, Van Jones, the original villain in the Glenn Beck canon.

Beck isn’t, of course, against a regime where the vote of the people substantively directs the behavior of the government– the concept of direct, Athenian democracy is what has him shaking. Constitutional republicanism where the people do not write or vote on laws per se but have a foolproof check on those who do is Beck’s favorite form of government, and he fears that those he listed on the chalkboard (the Muslim Brotherhood and Van Jones and all those folks) are deliberately confusing Americans into wanting the people of the Middle East to write their own laws, with no parliamentary process in between.

To clarify his point, Beck turns to the source of all his wisdom, the Founders, quoting John Adams and his distaste for the concept of democracy: “there was never a democracy yet that did not commit suicide.” Beck goes on to explain that this is precisely why the unions and other reprehensible characters are calling for “mob rule” in America, and uses the example of Google executive Wael Ghonim‘s escape from Egypt to prove that being naive about this issue could be life-threatening. No one will debate Beck on the merits of mob rule, surely, but this latest play on semantics– an attempt to turn “democracy” into a dirty word for the American people– is a tight-rope act only a master orator could complete successfully.