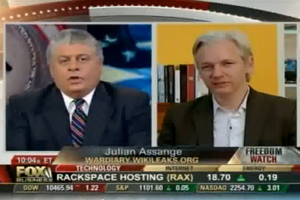 Perhaps the most eccentric show on cable news (not that there isn’t competition) had one of the most eccentric media characters on as a guest today: Judge Andrew Napolitano‘s Freedom Watch on Fox Business Network interviewed the founder of Wikileaks Julian Assange about the recent flood of sensitive national security documents released by his site. Assange was unapologetic and meticulous in detailing how his site processes and confirms information.

Assange, who rarely makes appearances in the US media, explained to Judge Napolitano that the documents were, in fact, legitimate, and that he had partnered with the New York Times and the German newspaper Der Spiegel to confirm them. And asked whether the American military had “truthfully and accurately” reported on the war in Afghanistan, he had a simple answer: “No.” “The corruption in reporting starts very early,” he explains, “it’s like the police reporting on the police.” He also argues that, not only are the reports inaccurate, they are “written to excuse the behavior,” and gave several examples of reports where the death counts were altered and civilians were written up as soldiers.

A bigger problem, according to Assange, was a project the government called the “kill or capture list”– a list of suspected terrorists that a special task force was assigned to take care of. “Informers are being paid by the US military to reveal information about Al-Qaeda or the Taliban,” he explained, “but, in fact, they just make up stories about their political enemies or their business enemies in order to have these people raided.” He continued:

“We noticed an unusual classification in one of the reports. It was ‘No foreign.’ That means do not disclose to foreign partners including the United Kingdom, Australia, and so on. 373 involved a deliberate missile attack on a house which held seven children and killed the seven children. We saw how people get on to the list. Some governor in Afghanistan doesn’t like you, and recommends you go on the list. The problem is that we can see that’s clearly a corruptable process. Previous media reportage showed that a senior US official had told Karzai, the president of Afghanistan’s brother, if he didn’t behave, he would be put on the list.”