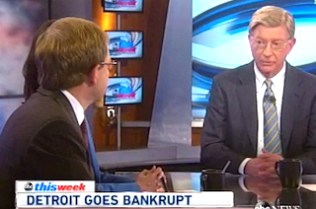 A panel on This Week With George Stephanopoulos went at each other over the possibility of federal intervention in Detroit’s bankruptcy, with the discussion growing especially heated after George Will suggested that Detroit’s “cultural problems,” including unwed mothers, were to blame for the city’s financial ruin.

“Eighty percent of the pain in this restructuring is being borne by the workers and the retirees if this plan goes through,” argued Steve Rattner, who oversaw the auto bailout and argued in an op-ed last week that the government should assist the city itself. “Detroit needs investment, and that’s where the federal government and the state, particularly, can and should help.”

“You can’t solve their problems because their problems are cultural,” Will said. “You have a city, 139 square miles, you can graze cattle in vast portions of it. Dangerous herds of feral dogs roam in there. You have three percent of fourth graders reading at the national math standards. 47% of Detroit residents are functionally illiterate. 79% of Detroit children are born to unmarried mothers. They don’t have a fiscal problem, Steve, they have a cultural collapse.”

“I find that really insulting to the people of Detroit,” said Katrina vanden Heuvel. “There is a serious discussion about the future of cities in a time of deindustrialization, but in many ways, Detroit has been a victim of market forces. I think that what Steve said is so critical, that retirees and workers should not bear this. This story should not be hijacked as one of about greedy, fiscal public unions.”

“What Steve said in his op-ed was that the people in Detroit are no more to blame than the victims of Hurricane Sandy because apart from voting—well what did they vote for?” Will said. “For sixty years they voted for incompetents, malcontents and in some cases criminals.”

“So what do you want to do?” Rattner responded. “Do you want to leave them sitting in exactly the situation you just described. Or in the spirit of America, trying to help people who are less fortunate—whether they’re victims of natural disasters or their own ignorance or whatever—do you want to reach out and try to help them, and try to reinvent Detroit? For not a lot of money. We’re talking about a couple billion dollars. This is small potatoes in the great scheme of life. Or we have your scenario, leave them all to sit with feral dogs for the rest of their lives.”

Watch the full exchange below, via ABC News: