Will Cain Agrees With George Will That Trump Shouldn’t Be Campaigning With Romney: ‘Flat Out No’
video

Will Cain Agrees With George Will That Trump Shouldn’t Be Campaigning With Romney: ‘Flat Out No’ 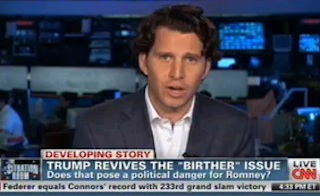 On CNN’s The Situation Room with guest host Jim Acosta , political analysts Will Cain and Hilary Rosen spoke about the wisdom of presumptive Republican nominee Mitt Romney‘s fundraising dinner with Donald Trump. “You comfortable with Donald Trump hosting and being at a fundraiser with Mitt Romney there in Las Vegas?” Acosta asked Cain. “No, no, just flat out no,” Cain replied sharply.

“Does that seem like trouble to you?” Acosta pressed.

Acosta asked Rosen about Will’s comments, and who was right.

“George Will is right,” Rosen agreed. “I think as a practical matter, the fact that Mitt Romney is afraid to push Donald Trump aside says almost too much about Mitt Romney and who cares about Donald Trump, we care about this guy we’re electing and he needs to talk about where he stands in respect to supporting Trump or not.”