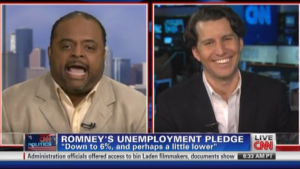 Asked whether Romney can achieve that, Cain said, “I don’t know that I would encourage Romney” to make such promises. Not too long ago, another president promised an unemployment rate below 8 percent, and that has yet to come true, he noted — referring, of course, to President Obama. It’s “not the best idea,” he said, to make policy decisions tied to specific unemployment numbers.

Martin’s message to Romney was, “How about you simply shut up and focus on policies?” Read Congress’s projections, he said, because “we’re on the same pattern.” He further added that if Romney gets to the White House, he’ll realize that he can’t move the unemployment figure the way he thinks he can.

It’s projection, Cain argued. Nothing is guaranteed, so why are we putting so much emphasis on it? Martin agreed, there are no guarantees — but, he said, we make these sorts of projections all the time. Noting Romney’s “Day One” ad (in which he depicts the first day of a Romney presidency), Martin said it’s “cute” but unrealistic. “Reality sets in,” he said. Campaigning is different from actually being the president.