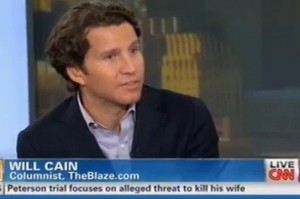 It was only a matter of time, but a new Swiftboat-style group has put out an ad that seeks to turn President Obama’s successful leadership in the turning of Osama bin Laden into fish food against him. Despite a torrent of reporting discrediting the ad, which accuses the President of glomming credit and leaking secret information, The Blaze‘s Will Cain defended the ad on Thursday morning’s Starting Point, saying that “these former special forces officers are worried about details in leaks, and they detail in their ad the effects of that.”

The Obama campaign was quick to push back against the video. Spokesman Ben LaBolt released this statement:

“The Republicans are resorting to Swift Boat tactics because when it comes to foreign policy and national security, Mitt Romney has offered nothing but reckless rhetoric.  His two major foreign policy speeches never even mentioned Al Qaeda once, and he hasn’t outlined a plan for America’s relations with a single region of the world.  In 2008, the President said he’d end the war in Iraq in a responsible way and refocus on taking out Al Qaeda’s leaders, and few would question that he’s kept his word.”

Another campaign official said “No one in this group is in a position to speak with any authority on these issues and on what impact these leaks might have, and it’s clear they’ve resorted to making things up for purely political reasons.”

The campaign also provided a slew of background reporting on the group that made the film, “Dishonorable Disclosures,” which comes from Special Operations OPSEC Education Fund, a group that claims to be non-partisan, but one which shares an address with two Republican consulting firms, and whose president is a former Republican congressional candidate. Several of the group’s members have unmistakably Republican backgrounds, including spokesman Fred Rustmann, who defended the Bush administration’s leak of Valerie Plame‘s identity, and a birther named Paul Vallely.  The ad features portions of President Obama’s announcement of the bin Laden raid, but omits the parts in which he gives credit to the forces that carried out the mission.

Despite the film’s obvious bad faith, Will Cain tried to mount a defense of it, disagreeing with the rest of the panel’s conclusion (and anyone else with eyes and ears) that the “non-partisan” claim is bunk. “These former special forces officers are worried about details in leaks, and they detail in their ad the effects of that,” Cain said.

Unfortunately, host Soledad O’Brien had to toss to a break, and the discussion didn’t go any further.

If the political media were doing their job, the bin Laden raid wouldn’t just be a great accomplishment that nobody will let President Obama take an ounce of credit for, it would be a liability for Mitt Romney, who, despite now claiming that “any president” would have greenlit the operation, repeatedly said that he would not approve unilateral action in Pakistan as president. While Romney runs around talking tough about Iran, the media also fails to report that in 2007, he said he would need to “check with the lawyers” before using military force against Iran.

With a negligent, clearly out-of-the-tank media like that, who needs Swiftboats?