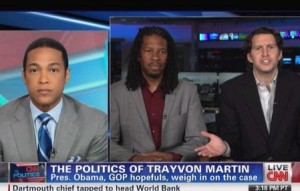 On Sunday evening, CNN’s Don Lemon invited ESPN writer LZ Granderson and contributor Will Cain to talk about the politics of the Trayvon Martin case. What started out as a discussion of the president’s comment last week spiraled into a heated debate — with Cain vehemently denying the role of race in the case. Disputing arguments from Lemon and Granderson, he refused to play into the emotions of the case, saying we need a “full set of facts.”

Lemon began the segment with the question, “Should the president have commented on this case?” Granderson said he absolutely should have. While people are “trying not to talk about color,” he said, the fact is that race is a part of this. And it’s “incredibly ridiculous” to think President Obama, a black man, would not respond.

Cain acknowledged this “compelling argument,” but said the “whole problem” with this case is that “there’s still not a full spectrum of information here. There’s still not a finished investigation. […] we don’t have all the facts, bottom line.” Granderson shot back, asking, “beyond the 911 tape,” what more do you need?

Unconvinced, Cain went on: “There’s still a moment in this timeline, in this case, where George Zimmerman and Trayvon Martin were face to face. What happened in that moment? Was George Zimmerman attacked? Does he have a legitimate claim to self-defense?”

Granderson incredulously replied: “You cannot tell me you thought that skinny 17-year-old boy was going to kill, without a weapon, that big, grown man. That is an absolutely ridiculous stance to take. I hear what you’re saying about all the facts, but if you just look at the physicality of it all, it’s a ridiculous argument to make.”

The conversation continued to get heated, with Cain wondering why “going slow” sparks outrage. Lemon stepped in, saying the president commented on the feelings of Martin’s parents. “You cannot help but feel for anyone who loses a child,” he said. “That’s what’s raised the emotion.”

This further provoked Cain: “Well obviously everything you just said is true. But children die every day in this country, children die under horrible circumstances every day — and we don’t talk about it on TV!” (Lemon noted he just did a story about children dying in Afghanistan.)

Cain hammered out his argument:

I don’t think there’s an intelligent rebuttal to my point of view here, that all we’re doing is saying, all I’m saying is we don’t have a full set of facts. We don’t know everything that happened. The only response I get is outrage and emotion. All I’m telling you is, outrage and emotion aren’t good enough. There’s a legal system — we are innocent until proven guilty in this country. I am also telling you, everything looks bad for George Zimmerman here.

As Lemon noted the “realization about profiling in America,” Cain gave another shouted response: “No, no, no. See, you shifted the debate to racial profiling. And that’s not the conversation we were having!” He added, “What I’m telling you is, the public has made mistakes in these kinds of cases before — in the Duke lacrosse case, the whole country condemned some guys without a full set of facts.”

Lemon interjected, noting Cain was expressed outraged. Cain responded, “I am outraged at the irrationality you’re asking from me. You’re asking me to come on TV and be irrational.” Granderson disagreed, saying “there’s nothing irrational” about the their conversation.

Cain said: “If George Zimmerman were black, and Trayvon Martin were white, I would grant George Zimmerman, the black man, just the same benefit of the doubt that I am granting any defendant in any case.”

As Lemon commented that Cain was “outraged at the outrage,” he and Cain couldn’t even agree on that. Cain forcefully concluded, “I will not comment on anything without knowing what I’m talking about.”

Granderson shook his head at Cain’s repeated dismissal of race — and the three could only end up agreeing to disagree.

Take a look at the heated segment, via CNN: