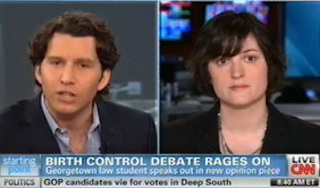 “You used this word several times, ‘access,'” said Cain. “I hope you and I can agree on one term of this debate. That is, no one is attempting to ban contraception or limit access and make it illegal for women to have this! The debate is about who should be providing it, who should be paying for it. Should employers determine what is involved in their compensation, determined in their health care benefits or should the government make certain requirements of employers? Can we agree that is what this debate is about?”

“Not exactly,” Fluke shot back at Cain. “I think there are multiple ways to limit access. Certainly making something illegal would be the most extreme form, but not covering it as a health care benefit the way other types of health care benefits are covered is another way to limit access and that’s what many women across the country are currently experiencing when they — even if they have insurance, co pays, can be as high as $50 a month, which is significant for a woman not making a lot of money.”

“But Sandra, couldn’t that same logic be applied to so many other things that health care doesn’t cover, such as gym memberships?” Cain countered. “Exercise is important to health but that’s not covered by health care insurance. Couldn’t that logic you’re using, saying access is denied because it’s not being offered to you for some reduced price, apply to so many things?”

Fluke appeared to be taken aback by the tenor of questioning that Cain took in what is perhaps her most challenging television appearance to date.

Update: The Blaze’s Billy Hallowell observes that Soledad O’Brien questioned Cain’s use of the gym membership analogy, following the interview.

“No, it focuses on the right question,” Cain responded. “Should employers determine the benefits or should the government be mandating what employers provide?”

Watch Cain and Fluke debate below, via CNN: