Will Cain Tangles With Debbie Wasserman Schultz: Why Are ‘You Guys’ Waiting To Address Budget Issues?

Will Cain Tangles With Debbie Wasserman Schultz On CNN 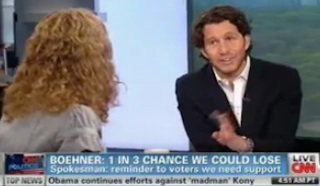 “I think that’s an interesting quote you put up also recognizing the amount of work that you guys have to do over the next six months,” Cain said, addressing the Congresswoman. “You have what is equivalent of all of the Bush tax cuts expiring, you have the budget resolution, you have to come together on those forced cuts. I think the total package is over $4 trillion. Larger than any stimulus passed and any tax cut that’s ever passed. Why aren’t you working on it yet? Why are you waiting until supposedly after the November election to address these issues?”

“I’m not in Congress,” countered Cain.

“But Speaker Boehner is the leader of Congress and controls the agenda with Eric Cantor…” said Schultz.

“I’m not in Congress,” reiterated Cain. “I’m asking you because you are a member of Congress.”

“I’m a member of Congress in the minority, unfortunately, which I plan to help change in November,” Schultz shot back. “But the people who control the agenda right now in the House of Representatives are the Republicans. Ask them why they haven’t brought a single jobs bill to the floor since they took over the majority. Ask them why they are getting ready to allow the student loan interest rates to double.”

“So put out a package right now to extend the Bush tax cuts, you would be on board with that is what you’re saying?” Cain asked.

“No, I’d be opposed to that,” affirmed Schultz.

“Then you would be obstructing that,” observed Cain.

“The Bush tax cuts adds $700 billion to the deficit. Why would we extend them?” argued Schultz. “We need to continue to focus on President Obama’s agenda, giving tax breaks to the middle class and 18 different tax breaks he’s given to small businesses –”

Cain cut off the DNC chief in mid-sentence to point out Wasserman Schultz didn’t want to address the issues at hand.

“It’s clear all of the things coming up before the end of the year, you’re not interested in working on those right now,” said Cain.

Watch Schultz and Cain mix it up below via CNN: