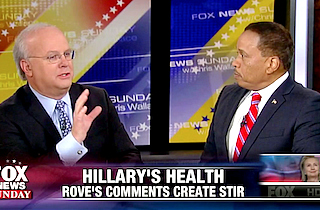 “Be careful with your analogies,” Rove said. “Hillary Clinton is going to have to cough up her medical records. Look, the Center for Disease Control says a concussion is a type of traumatic brain injury—”

“Doesn’t this remind everybody that you,” Williams suggested, “and your past as a very effective political operative, have gone after people, the Swiftboating of John Kerry—”

“Which was entirely legitimate,” Rove interrupted.

“I’m saying this as someone who’s known you a long time,” Williams said. “You’re an effective political operative, but you may be helping Hillary Clinton.”