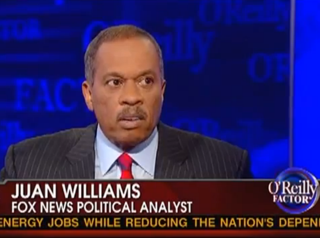 Juan Williams received some of the most visceral reaction of anyone during Monday’s Fox News Republican debate when asking Newt Gingrich to explain his comments on child janitors. On tonight’s O’Reilly Factor, he reacted to some of the fallout: namely, Chris Matthews claiming that Gingrich had pronounced his name in a “racially charged” way. Williams didn’t touch the race issue, but did say that he believed the audience looked at him during that as a “strange character.”

Williams and Bill O’Reilly began their discussion with Gingrich’s claim that young people need to be taught to have a work ethic, which Williams attacked. “When you see that jobs are offered to young people in this country, you have lines around the block… he was suggesting that somehow these kids don’t want to work,” he argued. O’Reilly perceived it differently, as Gingrich suggesting that jobs within schools be funded by the government to help teach work ethic. That Williams did not find objectionable, nor did he find it compatible with Gingrich’s actual words. “He said the kids don’t have work ethic,” Williams contended, though O’Reilly replied that “he didn’t say it was the kids’ fault,” but that many grow up in a “welfare situation.”

“I think he wanted to play racial politics at that moment,” he said of the comments Gingrich used against him as moderator when confronted about the idea that some believed he wanted to “belittle” minorities. O’Reilly asked Williams whether he thought Gingrich “was pandering to a certain voter in South Carolina,” which Williams said he did believe. O’Reilly then turned to another aspect of the exchange: the way Gingrich pronounced “Juan.” “Chris Matthews,” O’Reilly explained, “said he way he called you Juan was kind of racist. Did you take it that way?”

“Remember, I’m facing Newt, so I heard behind me the moment he went ‘Juan… the minute I heard the hoot and hollering I realized how he played to the audience,” Williams responded, joking that the audience immediately began to ask “Who is this strange character, ‘Juan‘?” and adding the caveat that the setting is what made it different. He did not say what he though Gingrich thought of him or what he intended to say about Williams, only that “he wanted to stir the audience at that moment.”