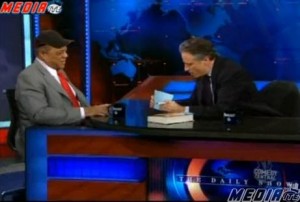 I know I used that joke yesterday, but Jon Stewart‘s observation about the marketing of outrage has a direct bearing here. His guest on last night’s Daily Show was baseball legend Willie Mays, and the interview was very illuminating. So much of what we cover here centers around whatever “outrageous” thing is being said by people like Glenn Beck, Rush Limbaugh, or Keith Olbermann, and while sometimes it truly is an outrage, hearing Mays talk about his experience in the segregated baseball world put that all in perspective.

Ironically, it is Mays’ levelheadedness that prevents a clip like this from going viral, which is a shame. The more people who see this, the better.

Willie Mays is just before my time as a baseball fan, but as a kid, I read everything there was to read about baseball, and watched every second of baseball film they’d show on TV. Mays is being modest when he says he would have just edged out Babe Ruth. As Stewart points out, he hit 660 home runs despite missing 2 years for military service, and despite playing most of his career in Candlestick Park, a hitter’s nightmare. He did all this without steroids, and without the benefit if a designated hitter rule to add a few years to his career.

He also played most of his career in the segregation era, a time period that carried perils much greater than water fountains or restaurant kitchens. I recall the level of racial hostility that was socially accepted in the 70s, and can’t even imagine what that must have been like in Mays’ time, when it was legally codified.

Although a much lesser indignity than segregation, Mays also played his entire career under baseball’s reserve clause, never enjoying the benefit of free agency. The most he ever made in a single season was $180k. That’s not even autograph money for today’s superstars. With all of that, Mays displays not a hint of bitterness.

There’s something else about Mays that’s impossible to capture with words or statistics. At its best, baseball transcends athletics, and becomes a work of art. In the main hall of that gallery hangs Willie Mays’ masterpiece, one crudely preserved in flickering black and white film that I’ve seen a hundred times, deceptively named to ignore its third act. If this picture doesn’t automatically come to mind when you hear the words “The Catch,” then you’re no kind of baseball fan.