Who Won Democratic Debate on ABC? 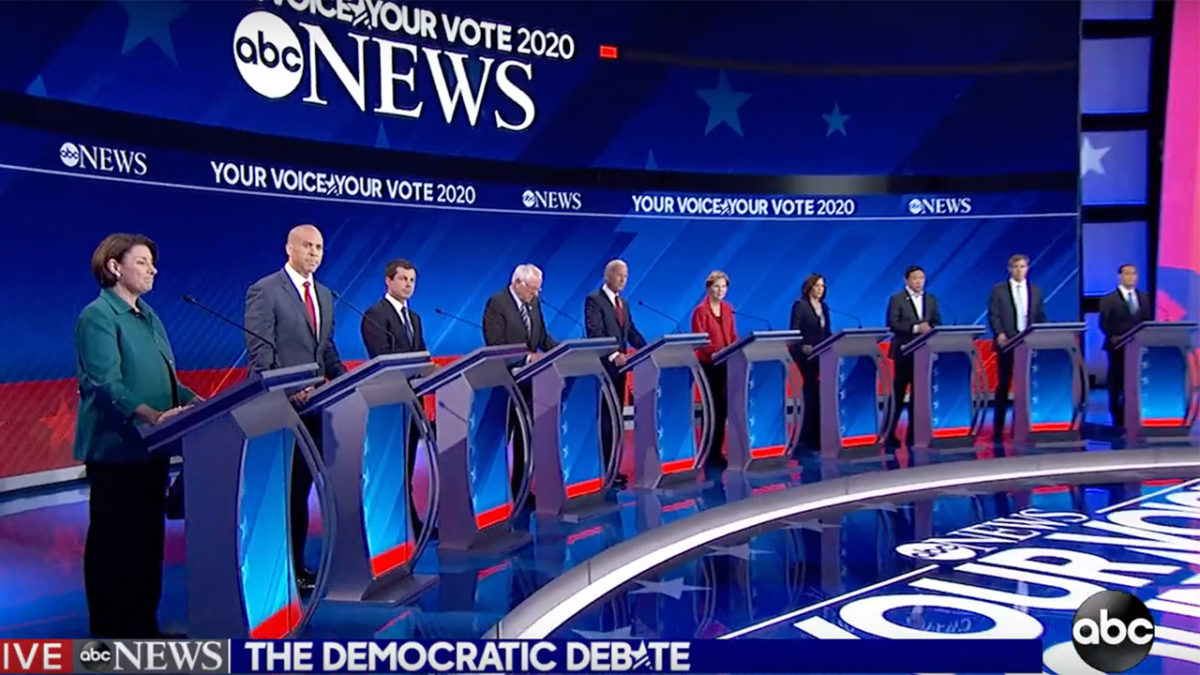 ABC’s first Democratic debate went down in Houston on Thursday night, to much fanfare. The broadcast network showed off the confidence of a broadcast network, choosing to open the debate in an understated and efficient manner that stood in stark contrast to the bells and whistles from prior cable news productions.

The show took just a few minutes before each candidate introduced themselves. The candidate introductions included some noteworthy fireworks: Andrew Yang offered a $12k-a-year raffle to ten families, Kamala Harris called out President Donald Trump before directing him to “go back to Fox News”; and Joe Biden came out clear, concise and confident.

During a White House press spray hours before the debate was set to start, Trump predicted that the eventual nominee would come from the top three in the polls: Biden, Elizabeth Warren, and Bernie Sanders. Almost by design, the first debate question was focused not just on health care but also entirely on Biden, Warren, and Sanders — none of whom emerged early as a clear winner.

Julian Castro got into it with Biden over health care coverage and drew what many considered a negative crowd reaction when he accused the former vice president of contradicting himself in the space of two minutes. The jab was derided on social media as a petty shot at Biden’s age.

ABC’s production team deserve credit for a debate format that seemed to feature much less moderator interruptions and crosstalk, as well as the right amount of entertaining back and forth. Some candidates were able to thrive in their well-regulated opportunities to speak, while others fell flat. Here are the winners and losers from Thursday night’s debate.

If the DNC was looking for a more balanced offering of praise and critiques, O’Rourke seemed the safe candidate to praise and avoid attacks. Perhaps he benefitted from being in his home state of Texas, or for his graceful and competent handling of the mass shooting in his home town of El Paso, but the former House Representative received accolades a number of times from his fellow candidates on the debate stage. O’Rourke may be the safe guy to praise because he currently poses less a threat based on recent polls, but the fledgling campaign surely loved the unsolicited praise from his fellow candidates. He also delivered some blue meat to progressives, drawing big applause for his fiery diatribes on guns and reparations.

Perhaps he benefitted from the soft bigotry of expectations that comes in the wake his gaffe-tastic run for president, or maybe he was just better prepared for the predictable political attacks, but Joe Biden stood firm as he faced tough criticism from his fellow front runners, Elizabeth Warren and Bernie Sanders. Though it’s hard to declare his performance an absolute “win,” Biden was cogent, clear and confident at a time when there are concerns about his cogency, clarity, and confidence. Even the clearest attack on Biden — Castro’s dog whistle at his age — came off as mean-spirited and not the hit the young Texan likely intended. Sure, he had a few gaffes, but it’s unlikely those were remarkable enough to do anything to his commanding lead in the polls. Biden gets praise for not messing up too hard, and in that regard, has become the Democratic version of George W. Bush. But here we are.

The Mayor of South Bend was able to take a notably different position in Thursday’s debate. No longer did he need to impress and win viewers over — he is now as close to a household name as anyone else with whom he shared the stage. But rather using that to fuel a hubristic approach, Mayor Pete once again showed off his notable EQ and took the high road throughout the debate, often reminding his fellow debaters, and viewers as well, that they were all on the same team. This approach only underlined his consistently calm and often pitch-perfect ability to acknowledge issues at the root of predictable political questions, but transcend them into larger conversations that seem more symptomatic of what currently ails this divided country — as well as what Democrats care about more than most issues: beating Donald Trump.

The pendulum swings both ways, and if past debates were unnecessarily harsh on the former president (and current MOST POPULAR Democratic leader), this debate was a course correction. Right off the bat, a number of candidates (led by Senator Elizabeth Warren) gave Obama’s legacy got a shout out, and much of the policy attacks aimed at Joe Biden were muted with praise for Obama. Even Kamala Harris reprised Obama’s campaign slogan in a marginally effective dig at Biden when she asked the former vice president why he says “no, we can’t” when we should be saying, “Yes, We Can!”

The other Texas native to share the Debate stage, Castro was feeling his onions Thursday night, but he may have crossed over from aggressive to mean. During a debate on healthcare coverage with Joe Biden, Castro challenged the former vice president in a rather unappealing way that seemed to be a dog whistle on Biden’s age. He accused Biden of contradicting himself on health care, asking, “are you forgetting what you said two minutes ago?!” This not only drew audible gasps from a surprised audience but also led fellow candidates to immediately call out the unnecessarily divisive nature of Castro’s call out. Yes, it got him attention, but was the sort of attention that will serve him well moving forward? Likely not.

He also got the facts badly wrong, as analysts have pointed out. Biden did not misspeak, as Castro alleged, just two minutes before on health care. So not only was the call out petty, it was also inaccurate.

One of the lasting charms of Senator Bernie Sanders is that he is so grounded in policy and what he believes to be best for the American citizenry that he often foregoes some of the more shallow concerns — like his appearance. And while Bernie was every bit as telegenic on Thursday night as he has been in the past, he appeared to be suffering from some sort of ailment that only accentuated his elderly and occasionally frumpy demeanor.

On a more material note, while Sanders drew praise from fellow candidates for his health care vision, he was rarely able to score rhetorical points and seemed to be stuck on the sidelines while other candidates grabbed more attention. As a friend texted me during the debate, “Bernie just spit on my food while talking.”

Not good. Or, in fairness to Senator Klobuchar, the real loser is the joke writer hired to zazz up her debate performance (watch out for that flying binder!) Ms. Klobuchar had some good moments — the best was probably chiding an over-aggressive Castro — but her zingers seemed overly rehearsed and lacked zing.

Amy Klobuchar is the worst joke-teller on the stage. By a country mile.

She did herself no favors when she introduced herself in a very honest and candid manner, noting how she wasn’t an entertainer, but that set a tone for a rather uneventful debate when what she needed was an eventful one. Odds of this debate making a difference in her middling polling? Slim.