Winners Of The Week: Rice 2.0, Walmart, MSNBC, Christie, And The Docile Apostle

Winners Of The Week: Rice 2.0, Walmart, MSNBC, Christie, And The Docile Apostle 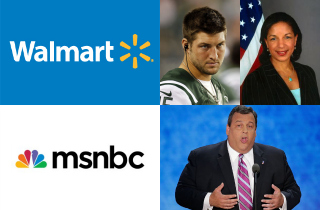 This is one of the best weeks of the year, if not THE best. A guaranteed 4½ day weekend, crisp but not necessarily cold weather (at least here in Jersey), along with family, food, friends, and what’s becoming a Thanksgiving night tradition two years running, watching the Jets season implode in new and exciting ways.

It’s also invariably a slow news week. But fear not, there are still plenty of winners for this week’s awards to talk about, including (in no particular order):

Susan Rice: Unlike your average consulate in Benghazi, the embattled UN Ambassador and potentially future Secretary of State appears to have plenty of protection from some important people.

First, President Barack Obama warned Senators John McCain and Lindsey Graham to cease all criticism of Rice and go after him instead if they wanted a fight regarding her qualifications for Secretary of State. Mr. Obama also declared Rice “had nothing to do” with Benghazi in his chivalrous defense.

Of course, Rice was sent out by the White House to five Sunday morning talk shows right after the attacks to explain to the American public what happened, so the whole “leave the girl out of this” defense by the President is a curious one.

If recent history is any indication, what came next wasn’t a surprise. Rice, like former Secretary of State Condi Rice, is African-American. A double-minority means double the air cover (at least when one side of the aisle is involved) from exemplary elected officials like Marcia Fudge (D-OH), who said in defense of Susan Rice, “It is a shame that anytime anything goes wrong, they pick on women and minorities.” And Jim Clyburn (D-SC) brought back fond memories of this year’s Presidential campaign by telling CNN he hears “code words” in GOP objections to Rice.

Never one to miss a chance to exploit racism where it doesn’t exist, MSNBC contributor Richard Wolffe went so far to portray John McCain – highly respected on both sides of aisle and someone who had no problem with Condi Rice’s nomination despite her color – as a racist.

This even prompted Chris Matthews, a man who hears racism dog whistles in controversial words like “Chicago”, “golf” and “angry”, to ask Wolffe, “You’re saying that McCain is being driven by racial prejudice here?”

“There is no other way to look at this.”

The President has Susan Rice’s back. Major Democrats have voiced their support. And the media outside of Fox News will either be apathetic about her nomination or outright advocates. Despite what you may be hearing out of some outlets, Rice is a winner right now.

Walmart: Nationwide walkouts and protests of its union employees and supporters on the biggest shopping day of the year is a big deal…especially when considering Walmart makes up nearly 1 percent of the nation’s workforce (1.4 million employees total).

But for all the sound and fury on the picket lines outside of stores, it all signified nothing (in fact, it may have served as unintentional advertising). The numbers are astounding, as Walmart reported record sales for Black Friday.

How good was business?

How many shoppers visited stores?

Over 22 million, which is two million more than the population of New York or Florida, and equal to the number of people currently living in Australia…

According to the company, full-time employees make $12.72 per hour. Not bad considering about 15% of the country is either not working, stopped looking for work, or is working part-time. Unions dispute the wage number, saying it’s less and should be more anyway…

Regardless of how labor negotiations turn out, shoppers looking for good deals don’t seem to care either way.

Tim Tebow: Just when you thought it was safe to read any column that doesn’t mention the world’s most popular backup…he infiltrates the former safe haven known as Mediaite. So in an effort to save you from having to read the name again, we’ll go with nicknames found throughout the Internet for God’s Quarterback from here on in.

So how can the Docile Apostle make the list despite not seeing the field during the Jets 30-point loss at home to the Pats Thanksgiving night?

For exactly that reason, of course!

Like Mitt Romney’s Project ORCA team, even being even associated with Rex Ryan’s crew is a loser at this point. If you’re the Messiah of the Meadowlands, somehow going home to the one-win Jacksonville Jaguars is looking like a good idea, where Nate Silver gives in the Incomplete Pastor a 104 percent chance of starting there if traded.

Chris Christie: Politicians in this 24/7 media age are like news anchors: They need to be esthetically pleasing, physically fit, well spoken, charismatic, and largely politically correct.

Christie (you may have heard) is a bit supple.

Is about as PC as Bill Maher…

And is more John Madden than Ronald Reagan on the stump.

And yet despite his former BFF Mitt Romney losing an election many on the Republican side believed he would win, Christie’s approval rating has jumped 15 points in a new statewide poll, primarily due to his almost-flawless handling of Hurricane Sandy.

Jersey is one of the bluer states in the republic (17-point victory for the President), so for a Republican governor to have a 67 percent approval rating is nothing short of astounding. In the same poll, 92 percent of respondents said Christie handled Sandy “very well”. And when pitted against New York Governor Andrew Cuomo, New York Mayor Mike Bloomberg and President Obama, Christie “won” (quotes applied because this was a tragedy some in the area will never recovery from) with 36 percent stating he did the best job, followed by 22 percent for the President, 15 percent for Cuomo and 12 percent for Marathon Mike.

Christie and Marco Rubio are your frontrunners for the GOP nomination in 2016. A combined ticket is an interesting conversation to have at Christmas parties next month.

Either way, the Garden State Governor is well positioned for any position right now.

MSNBC: According to the Pew Research Center’s Project for Excellence in Journalism, MSNBC ran a grand total of 0.0 negative stories about President Obama in the final week of the 2012 campaign. Of course, this meant that Mitt Romney received no positive stories during that same stretch.

If Pew had found that Fox had done the same to the President as MSNBC to Romney, not only would there be wall-to-wall coverage by the Maddows and O’Donnells of the world, but media critic Howie Kurtz at CNN would make it an hour-long primetime special. But surprisingly (or not), very little of this study/story is being reported in the mainstream media.

MSNBC President Phil Griffin, who has guided the network to easily the highest ratings in its history this year (and particularly after the Democratic National Convention), is oddly defensive around the obvious reason for the channel’s success: When presented with the Pew findings, Griffin insisted to the Washington Post that MSNBC’s coverage of the campaign was an “honest analysis”, while FOX was “cheerleading” and “creating a bubble of misinformation.”

Of course, the cable news highlight of the campaign came from Chris Matthews going all Howard Beale with an epic meltdown after the President’s no-show in the first debate (the same debate Rachel Maddow somehow declared immediately afterward of having “no clear winner”). Griffin dismisses Matthews’ “analysis” as honest and not cheerleading.

Got rid of pesky conservatives like Pat Buchanan and Tucker Carlson…

Decided against mounting criticism to go with an all-liberal-opinion-hosts format for important convention, debate and election-night coverage…

From a ratings perspective, it’s all working!

As a GOP Presidential candidate once said, “In America, we celebrate success. We don’t apologize for success.”

For years, “MSNBC” and “winner” could rarely be mentioned in the same sentence.

Well, they can be now when talking about the growing ratings gap between MSNBC and CNN. So instead of denying the obvious (which is backed up by actual numbers), its leader should simply say that a choice to appeal to the 50.8 percent of the country who voted for the President, and not the (ironic) 47.45 percent Romney received, has been made.

It may not be fair and balanced, but it’s a winning strategy.