Wired Reporter To Maddow: ‘Never Underestimate The Spinelessness of A Democrat’
Video

Wired Reporter To Maddow: ‘Never Underestimate The Spinelessness of A Democrat’ 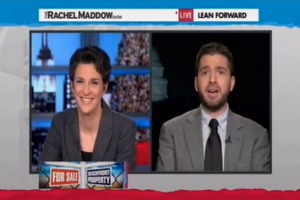 On her show Thursday night, Rachel Maddow invited on guest Spencer Ackerman, a reporter for Wired Magazine. In speaking of the current debate between Repubicans and Democrats over whether to close the U.S. detention facility at Guantanamo Bay, Maddow asked Ackerman whether he thought there was a new, strengthened resolve by Democrats to win fights against Republicans:

“But I feel like when I talk to Democrats now, when we see Democrats talk about these things in the media, they’re sort of starting to treat these types of fights like the stupid Ground Zero Mosque fight or some other conspiratorial right wing nonsense fight. There seems to be new resolve on the part of the Democrats, and maybe on the part of the President that they’re not going to lose fights when the other side’s argument is really dumb.”

Ackermen agreed, but took the opportunity to make a critical jab at Democrats: “I think you’re right about that. On the other hand, you know, never underestimate the spinelessness of a Democrat.”

After Maddow and Ackerman both had a chuckle over the joke, Ackerman got serious about the issue again and said to Maddow that he believed some progress was possible. He stated, “I am kind of getting the sense […] that at the very least, the firmament of political sentiment about national security might be ready to move. That Democratic politicians and some political appointees do kind of want to see if they perhaps can move it.”