With ‘Ashamed by U.S. Leaders’ Op-Ed, Tapper Treads Line Between Anchor and Opinion-Maker 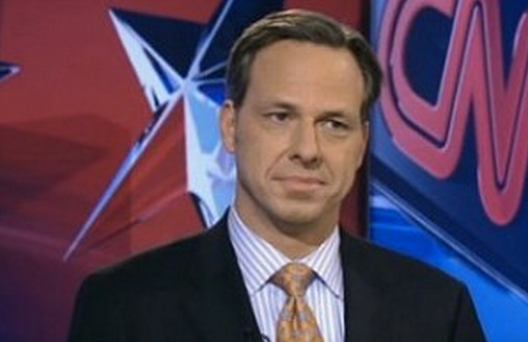 In a cable news world that is fueled less by the Joe Friday Dragnet version of straight news (Just the facts, ma’am) and more by provocative opinion, Jake Tapper is one of the few who is difficult to get a read on for two reasons:

1) He doesn’t appear to be left or right; and 2) Only very periodically does he inject his own beliefs into a debate.

So when Tapper does offer up a strong opinion, more than a few people take notice. We saw it over the summer during the first round of the Ferguson protests, when the CNN anchor openly criticized the militarized police force during a live shot from the field:

Now I want you to look at what is going on in Ferguson, Missouri, in downtown America, okay? These are armed police, with — not machine guns — semi-automatic rifles, with batons, with shields, many of them dressed for combat. Now why they’re doing this? I don’t know. Because there is no threat going on here. None that merits this. There is none, okay? Absolutely there have been looters, absolutely over the last nine days there’s been violence, but there is nothing going on on this street right now that merits this scene out of Bagram. Nothing.

So if people wonder why the people of Ferguson, Missouri are so upset, this is part of the reason. What is this? This doesn’t make any sense.”

This assessment didn’t sit well with some in conservative media, who felt Tapper was grandstanding and taking the side of the protesters. Still, the debate seemingly changed after Tapper’s blunt assessment around militarized police forces across the country as a whole. It wasn’t just Tapper sharing this perspective, of course, but with ratings at a peak for CNN at the time and many eyes watching, Tapper became the straw that stirred the drink, or in this case, the debate.

Fast forward to two days ago, when the 45-year-old Dartmouth grad was so ashamed by the lack of senior American officials at the Paris Unity Rally in the wake of the Charlie Hebdo terror attacks that he felt compelled to write an op-ed about it. Dicey territory for Tapper, who seems to understand the importance of self-branding in today’s media world. And in his case, Tapper is an anchor, which is generally defined in the Joe Friday fact-based manner above (facts, yes; opinion, no). Or if in need of an actual example you can see right now, watch just about any BBC newscast for about ten minutes.

That said, Tapper likely doesn’t want to be categorized as another opinion journalist (CNN declined a request for an interview, hence the use of “likely”). So in the case of high-ranking Americans — and particularly President Obama — being noticeably absent in Paris, he walks the fine line of subletting an apartment in Opinionville via a column on CNN.com, where Tapper specifically adds a disclaimer stating: “I say this as an American — not as a journalist, not as a representative of CNN — but as an American: I was ashamed.”

He then went on to slam everyone from President Obama to Eric Holder to John Boehner to Mitch McConnell to almost every likely presidential candidate for not making the trip. But most of the focus–fairly or unfairly–was on Tapper and the president, which right media ran with using the same playbook applied when Jon Stewart criticizes Mr. Obama: “See? Even Jake Tapper says the president should have been there…”

Now is this a case of Tapper having his cake and eating it too? Absolutely. Because if he wanted to avoid the opinion of coming from a representative on CNN, that op-ed can’t appear on CNN.com. Jake, like Greta Van Susteren and GretaWire.com, does own a website called JakeTapper.com, and a piece published on his own website could have very easily gone viral once social media got wind of it (he does have 377,000 followers to share it with). However, all of that said, as long as Tapper doesn’t make a habit of injecting himself into a debate on anything resembling even a semi-regular basis, he gets a pass here. And as you may have noticed, Tapper again served as a tipping point in the debate around the president’s no-show to the rally, with the administration finding support of not attending virtually non-existent.

Why? Because as we’re seeing in cable news, it’s virtually impossible for even the best straight news anchors to avoid opinion completely.

Exhibit A is Shepard Smith, who has received his share of praise here as among the best news anchors in the business, particularly during breaking news stories. But lately it seems Smith is drifting over to the opinion side more often, when not too long ago it appeared to pain him to do so in an effort to protect his brand. Why is that protection important? Because with opinions comes polarization, mistrust. And in today’s polarized media environment, one risks alienating a good chuck of an audience if appearing to take a side some viewers don’t particularly agree with, which leads them to question the motives of the messenger.

But thanks to decades of experience and kudos coming from both sides of the media aisle, Shep and Tapper have built enough gravitas to earn the right to go the opinion route, albeit only sparingly and when absolutely warranted. The trick is not to abuse the privilege to avoid accusations of impartiality.

Both are walking up to that line. Both get noticed when stirring the drink.

But each have been wise enough not to cross that line…at least not yet.