With ‘Generic Republican’ Leading 2012 Polls, Why Is Tim Pawlenty Not A Media Darling? 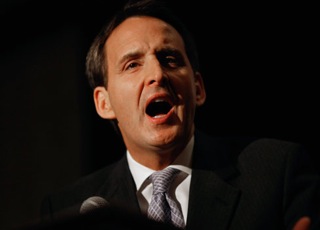 It’s been quite the stormy season for Republican presidential hopefuls– Donald Trump‘s hair billowing in the gusts of controversy, the smell of Herman Cain‘s delicious pizza wafting about, the sweet melody of “Dancing Queen” playing out Newt Gingrich‘s cell phone. Shiny objects galore for the media to feast on. But voters have made their choice loud and clear: “Generic Republican” is their guy, even sometimes over President Obama. So why is everyone ignoring the blandest candidate in the field, former Minnesota governor Tim Pawlenty?

The Gallup poll putting any Republican that doesn’t stand out over President Obama appeared to be a direct reaction to the first debate of the campaign season, hosted by Fox News. The highlights of that debate were Rep. Ron Paul demanding the legalization of heroin, the Godfather’s Pizza CEO winning the hearts of a Frank Luntz focus group, and Rick Santorum‘s staunch rebuke of multilingualism. Pawlenty was there, of course, and must have said something about lowering the national debt and caring about our troops. But the Gallup poll shows that just because no one noticed he was there doesn’t mean they wouldn’t vote for him.

Pawlenty is not entirely blameless in the dearth of media coverage about him– the same Gallup poll shows him straggling behind Sen. Scott Brown and Rep. Paul in a “just off the top of your head” straw poll. Every story needs a “hook,” and Pawlenty’s milquetoast brand isn’t exactly built for headlines, meaning little to no name recognition for the ideas that appeal to moderates. Compiling a list of the “craziest” media moments of the Tim Pawlenty campaign feels a bit like listing the healthiest things on Guy Fieri‘s many television shows, but, for the sake of argument, here they are:

After this onslaught of outrageous behavior, Pawlenty finally settled down and corrected the common misconception that he was the “loudest person or most extreme person in the race,” in the process almost but not quite taking a shot at Herman Cain. If the pattern isn’t already clear, Pawlenty is a tease about being interesting. He will mutter an eye-catching soundbite– say, “I am running for president”– and immediately retract it, even when it wouldn’t be controversial if any other candidate said it. It’s a sly way of indicating he has the one thing lacking in the election cycle so far: a sense of restraint– which is actually not an unpopular thing for someone who wants access to the nuclear football to display.

The dilemma this puts Pawlenty in between name recognition and voter appeal would naturally lead to some empathy from the sort of voter whose reaction to the current field is to vote for “generic Republican” over anyone else (Mitt Romney‘s dominance of the “off the top of your head” poll exposes the same hunger for normalcy, factoring in the major detriment name recognition will be for Pawlenty). Pawlenty is running for President of the United States– not, as many of his challengers are accused of, Fox News contributor. His campaign has vocally made their objective to govern, not entertain. Because the name of the game for those covering the presidential race is to entertain (think MSNBC’s ratings versus C-SPAN’s), Pawlenty’s brand just isn’t good business.

Earlier this year, Pawlenty attempted to repackage himself as an edible nugget for a news world that seeks out, in large part, self-deprecation– Snooki didn’t become famous for her high self-esteem, after all, nor does Newt Gingrich get news coverage when he isn’t in humiliating PR freefall– and it showed. It got him bad publicity, a concept that exists only for those whose careers hinge on public opinion. Giving up any pretension of being “interesting” to the 24-hour news cycle is the most unique thing any candidate has done this campaign season, and while it won’t exactly help get his name out there, the fact that studies show voters searching for something inoffensive in this sea of fameballs should make Pawlenty a news story.

That’s not to say that Pawlenty is the only one that stands to gain from the media caring about his run. If that were the case, the argument would be moot as it is not the media’s responsibility to help candidates, only to help the public get to know them. Nor is that to say that no ill could come out of renewed interest in the former Minnesota governor for Pawlenty himself. Perhaps part of the lack of pressure comes from a collective fear that scrutiny will reveal Pawlenty is not so normal after all– he did get elected in the same state as Jesse Ventura and Al Franken. David Graham at The Daily Beast writes regarding Pawlenty that one must “think of the early campaign season as flirtation and the primaries as engagement; it’s a variation on the rule that one should date bad boys or girls and marry good ones.” If Pawlenty is the sort of candidate you bring home to mother, the media has a responsibility to scrounge around his closet for skeletons. Then again, the sort of scrutiny Pawlenty deserves would have revealed in 2008, for example, that Sarah Palin is actually a moderate Republican that, when push comes to shove, is willing to stand up for the rights of same-sex couples and table anti-abortion legislation.

Post-Trump– and perhaps partially fueled by the simultaneous implosion of Charlie Sheen— normal is the new weird, and Pawlenty makes a vice of normalcy. It’s not quite sex, drugs, or rock ‘n’ roll, but voters seem to be seeking it, anyway. And if they’ll vote for it, it’s a news story.